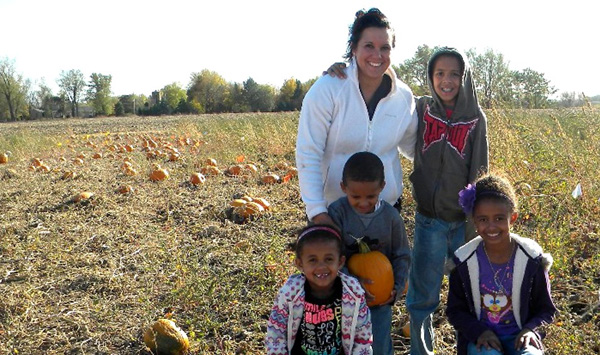 Whether you are looking for a gigantic pumpkin, a little one for the new born, a white or orange one, Furleigh’s Fruit & Vegetable Farm will have one just for you.

The cool weather didn’t stop the Griffin family from exploring the free haunted maze and picking out their special pumpkin.  Mom, Becky, looked to be having a good time with the children as well.  Becky’s daughter, Nyasia, saw her pumpkin and said, “I want this one.”  It was a pretty, oblong orange one, and Nyasia sat on it, so nobody else could get it.

“This is the my first trip out here,” said Kristin Stumpe.  “I want a white one,” she continued as she looked for that perfect one just for her.  Kristin’s sons Boston Winters and Tyler Patterson were still looking, but Boston, the youngest, was about to make his final decision.  “I want mine to have the speckled bumps,” he told his dad, Jim Winters, Jr.  First he picked a small one, but thought better of it and grabbed a bigger one with a longer stem.  That left Tyler to pick his.  He found his and the venture through the pumpkin patch was complete, but not better grabbing some homemade honey of Donna Furleigh’s.