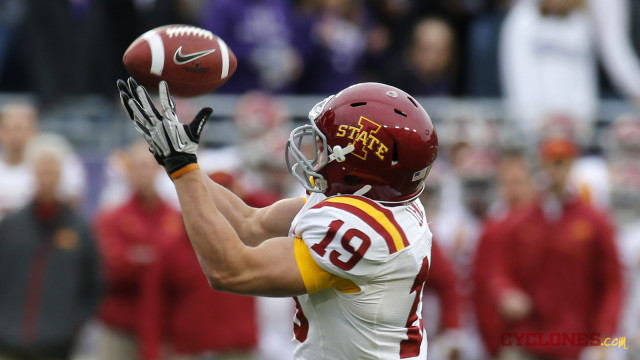 FT WORTH, Texas – David Irving tipped a pass, intercepted it and ran 21 yards for a touchdown and Iowa State ended the nation’s longest win streak with a 37-23 win over the No. 13 TCU Saturday in Amon G. Carter Stadium. The win marked the first time Iowa State has beaten a ranked team in three straight seasons (Texas, 2010; Oklahoma State 2011 and TCU 2012). Iowa State’s Jake Knott grabbed an interception to ice the game with 2:15 remaining.

Jared Barnett, making his first start since the Pinstripe Bowl last season, went up top early against a TCU defense that was committed to stopping the run.  On the game’s fourth play, Barnett hit wide receiver Josh Lenz who raced down the sideline on a 51-yard TD play that put Iowa State ahead 7-0 with 13:48 left in the first quarter.

An interception by Jacques Washington, his third this season, led to a 41-yard field goal by Edwin Arceo that put the Cyclones ahead 10-0 at the 9:38 mark of the first quarter.  A TCU touchdown closed the gap to 10-7 but Barnett countered with a 74-yard strike down the middle of the field to Lenz and Iowa State led 16-7 as the quarter ended. The 74-yard play was Iowa State’s longest pass play since 2004.

TCU was hampered by three first-half turnovers but managed a 38-yard field goal by Jaden Oberkrom with 1:14 left in the first half, to close the gap to 16-10. The Iowa State defense stopped a final TCU drive that started after an interception.

Lenz finished with five catches for a career-high 147 yards and three receiving touchdowns. His passing touchdown to Brun was the second of his career.

Knott had a game-high 13 tackles and his second interception of the season. In the first half, the senior linebacker became the 14th player in school history to go over the 300-tackle mark.

The Cyclones will be back in action next Saturday at 11 a.m. against Kansas State.