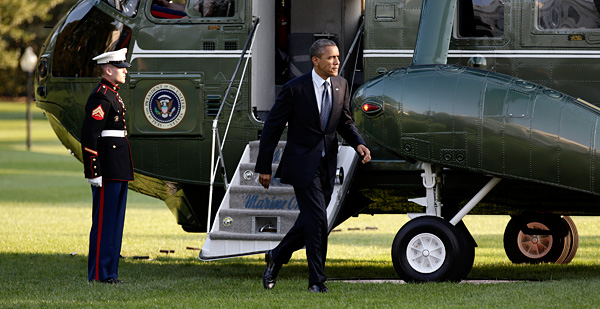 FAIRFAX, Va. — President Barack Obama’s new companion on the campaign trail these days is Big Bird, star of every campaign speech since Mitt Romney vowed to kick the giant yellow Muppet off the dole.

Don’t worry, Obama facetiously assured a crowd here on Friday, Romney is onto this layabout and his friends at public broadcasting who are now “driving the deficits” of federal government.

Romney wants to lighten the load on Wall Street, he went on, “but he’s going to bring the hammer down on Sesame Street.”

Obama’s voice quavered, as though he was fighting laughter. The crowd howled. He returned to the reference several times in a feisty speech that reeled from joking about his Republican opponent to railing against his agenda.

It was a far cry from the candidate people saw on stage earlier in the week during the first presidential debate, dutifully taking notes on Romney’s remarks and avoiding not only eye contact but direct confrontation in general.

Friday was a more typical day of campaign performance for Obama, who throughout the fall has shown that he is plenty willing to mix it up — as long as it’s from a distance.

Obama spends as much time contrasting himself with his opponent as Romney does. He derides Republican economic philosophy and the Romney agenda.

He tends to tinge the personal references with humor, though. Even when he and Romney aren’t in the same room, advisers say, the president doesn’t like to come off as mean or insulting.

Indeed, video footage of a petty president would be deadly for the candidate who holds up an ideal of the U.S. as a nation “not as divided as our politics would suggest.”

The crowds at Obama events generally stay tuned throughout the half hour or 45 minutes the president speaks, interrupting him with applause or catcalls as he works his way through a basic speech stump.

The speech focuses on jobs but varies in the supporting material it cites, depending on the audience. In the Virginia suburbs on Friday morning, Obama went heavy on women’s issues, with equal pay, choice in health care and education all presented in terms of economics.

Obama talked about the new drop in the unemployment rate — a sign, he said, that the economy is moving in the right direction.

And he talked about Romney in a joking way that still conveyed a sharp political point.

“My opponent has been trying to do a two-step and re-position, and got an extreme makeover,” Obama said. “But the bottom line is, his underlying philosophy is the top-down economics that we’ve seen before.”

As for reducing the deficit, Obama said, “his big example is to go after public television. So for all you moms and kids out there, don’t worry — someone is finally getting tough on Big Bird. Rounding him up.”

But in the crowds at the Virginia and Ohio rallies, voters said they were happy to see their president display some fire in the belly.

“He was pretty fiery today, and we need that,” said Paul Davis, a medical student who turned out in the rain to hear the president speak at Cleveland State University. “I hope he’s able to unpack the lies and distortions we hear from Governor Romney and his corporate sponsors.”

“It’s hilarious,” she said. “Public broadcasting contributes just about zero to the deficit. … If you go after Big Bird, is that supposed to show that you’re tough?”

As Obama spoke on that subject, a young boy of about 6 or 7 began to chant, “Save Big Bird! Save Big Bird!” The adults around him joined in.

The audience clearly on his side, Obama elongated his Big Bird rant, ending with, “Make a run for it, Elmo!”

As president, Obama spends much of his time in the company of people who agree with him. After four years of experiencing the deference generally accorded to the leader of the free world, some analysts have suggested, Obama may need a little practice at once again countenancing face-to-face rudeness.

If that’s a priority, he may want to schedule a few more small-group encounters like his last event on Friday.

On his way out of Cleveland, the president stopped to chat with business owners at some local shops, including Turczyk’s Meats and Rolston Poultry.

He asked the proprietor at Rolston how business was going.

“Terrible,” the man said, “since you got here.”

A journalist standing nearby noted in a pool report that Obama “didn’t appear amused by the sentiment.”