Obama debate stumble might stem from life in bubble 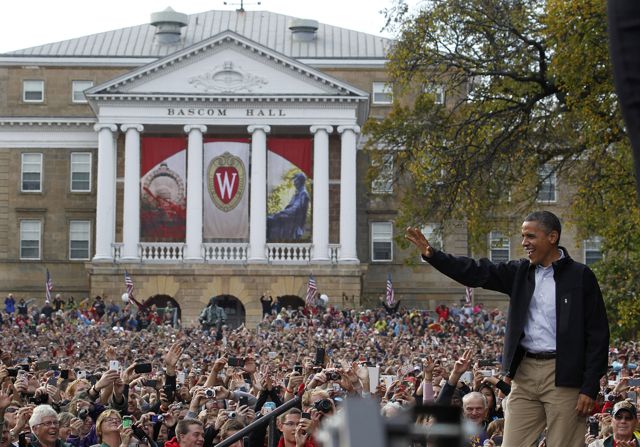 Now President Barack Obama’s wobbly performance against Mitt Romney at their first debate is raising questions about whether he’s been too sheltered by a White House that keeps him away from skeptical audiences and minimizes confrontation.

Obama’s 2008 opponent, Arizona Republican Sen. John McCain, said Obama’s lackluster performance at Wednesday’s debate in Denver stemmed from four years of dealing with an “adoring media.” Other political observers said it’s a result of Obama’s relative isolation in Washington: He prefers interviews with select journalists to unpredictable press conferences, and he doesn’t mix much with members of Congress or parry and thrust with critics who could challenge his assertions.

“He’s a guy who has no pushback on anything, ever,” said Charlie Cook, an independent political analyst and editor and publisher of The Cook Political Report. “He’s not doing press conferences, he’s got little interaction with members of Congress and he’s surrounded with acolytes. I think it showed.”

Obama has held fewer press conferences and question-and-answer sessions with reporters than his recent predecessors, according to statistics compiled by Martha Joynt Kumar, a Towson University political science professor who studies the presidency and keeps detailed records of Obama’s press interactions.

“He prefers to be in situations where he feels he has all the facts,” Kumar said. “But the world of the president is a world of imperfection.”

She noted that former Presidents George W. Bush and Bill Clinton engaged more often in short question-and-answer sessions with reporters, “knowing that they’d have to deliver answers to questions that they might not have anticipated.”

The White House pushed back on suggestions that Obama had gone “soft” as a result of his carefully controlled press strategy and a four-year break from debates.

“Over the course of his presidency he’s done innumerable interviews and press conferences and TV interviews,” said senior adviser David Plouffe. “The president wanted to make a case about where we are in the country, where we need to go, have a dialogue with the American people about his ideas, how those contrast with Gov. Romney.”

He suggested that instead, reporters were “itching to write the Romney comeback story, so it was already leaning in that direction.”

But campaign officials said Thursday that they planned a “hard look” at Obama’s debate performance.

“It’s like a playoff in sports. You evaluate after every contest and you make adjustments,” senior campaign adviser David Axelrod said, adding, “I think there are some strategic changes that have to be made, and we’ll make them.”

The campaign signaled Thursday that it would look to shift the narrative to Romney’s responses at the debate, saying they don’t match his plans. Axelrod, who said he wouldn’t play “theater critic” on Obama’s appearance, insisted Romney was performing.

“The president viewed it as a great opportunity to talk to the American people,” Axelrod said of Obama’s turn on the stage. “He didn’t do it perhaps as much as Gov. Romney did, a performance. I readily concede that that’s not the president’s strong suit in these events.”

Indeed, Obama’s flat performance left some analysts at a loss.

“Frankly, I’m just baffled,” said Stephen Hess, a former staffer of the Eisenhower and Nixon administrations and adviser to Presidents Gerald Ford and Jimmy Carter who now studies the presidency and the media at the Brookings Institution. “He doesn’t need to have held another press conference to be prepared or another campaign event to know what his opponent is going to throw at him. I’m searching for some reason why he didn’t do better.”