This news story was published on September 30, 2012.
Advertise on NIT • Subscribe to NIT 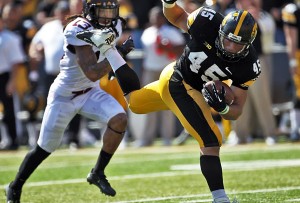 IOWA CITY, Iowa — Minnesota coach Jerry Kill’s team was the surprise of the Big Ten entering conference play. And the Gophers continued to surprise, only in a different way, on Saturday, Sept. 29, as they fell behind Iowa by 24 points in the first half and lost 31-13.

The Gophers (4-1, 0-1 Big Ten) committed four turnovers (three interceptions of quarterback Max Shortell) and allowed Iowa fullback Mark Weisman to rush for 177 yards. But what hurt the Gophers most was having to watch Hawkeyes players rush the field to regain the Floyd of Rosedale pig trophy that had been in Minnesota’s possession the past two seasons.

After having the longest winning streak in the conference snapped at five games, the Gophers now have to go into a bye week wondering how good they really are. This was supposed to be a down year for Iowa (3-2, 1-0) after home losses to Iowa State and Central Michigan. But beating down a rival helped the Hawkeyes show they might not be that bad.

How good is Minnesota? That question won’t be answered until after the bye week — maybe longer. One thing the Gophers have shown is they can overcome adversity. They had to deal with the death of former teammate Gary Tinsley in the spring and an ankle injury to starting quarterback MarQueis Gray in the third game of the season. Their challenge now is to respond with a strong performance against Northwestern (5-0) at homecoming on Oct. 13.

A victory over Northwestern would place the Gophers one win

away from being bowl eligible.

“We’ll find out who is really, really invested and really understands how to fight back,” Kill said.

The Hawkeyes were ready from the start to use Minnesota as an outlet for their frustration over last week’s 32-31 loss to Central Michigan. They gained 328 of their 374 yards in the first half, surpassing what the Gophers had been allowing per game (308) in the first four games.

a touchdown in the first half Saturday. The former backup fullback had runs of 44 and 27 yards on one possession late in the first quarter, putting him over 100 yards rushing at that point.

Meanwhile, Shortell could lead the Gophers offense to only 75 yards in the first half. He passed for only 32 of his 197 yards in the half.

Minnesota’s defense had not been tested by a powerful downfield rushing team until Saturday. The secondary had been a strength, intercepting a Big Ten-high seven passes entering the game. But it had no picks against Iowa’s struggling quarterback, James VanDenBerg. And it fell asleep on a 47-yard flea-flicker touchdown pass from Vandenberg to Jordan Cotton to make it 17-0 to start the second quarter.

The Gophers had been the only team in the country not to give up a 30-yard pass play. But Iowa made them vulnerable to the play-action pass, and they gave up two passes longer than 40 yards in the first half.

“You can’t give up those big plays,” senior linebacker Mike Rallis said. “If there is a missed assignment, then somebody has to tackle and get them down. They took advantage of it.”

As poorly as the defense played in the first half, though, Minnesota kept Iowa’s offense off the scoreboard in the second half. The Hawkeyes’ only points came off Christian Kirksey’s 68-yard interception return for a touchdown on a poorly thrown pass by Shortell with 5:15 left in the fourth quarter.

Kill saw his young quarterback, who had no running game to lean on, make too many mistakes. He saw his defense get dominated up front and, at times, everywhere else. But that didn’t worry the Gophers coach the most after the game. Injuries did. The bye week comes at a good time, he said.

“The biggest thing I’m concerned about is getting healthy,” Kill said.