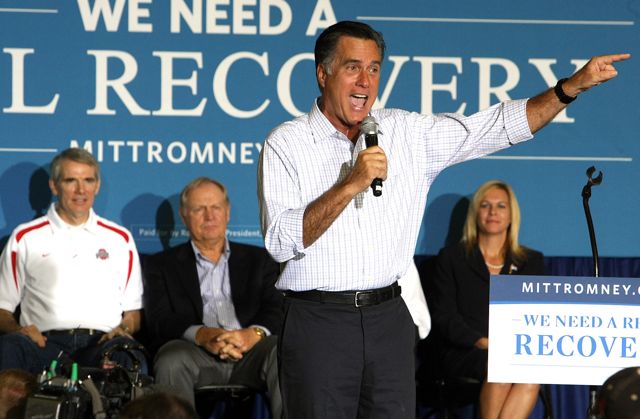 WESTERVILLE, Ohio — Republican presidential candidate Mitt Romney barnstormed Ohio on Wednesday amid signs that the battleground state — and perhaps other key battlegrounds as well — is slipping farther from his grasp.

With President Barack Obama also campaigning in the state, Romney sharpened his economic and deficit message on a daylong bus tour through the rainy Buckeye State, an unusually busy day for a candidate who hasn’t done a lot of multiple campaign events on the road lately.

The stepped-up campaigning came six weeks before Election Day as a series of new polls shows Romney falling behind Obama in several swing states — including Ohio, Florida and Virginia — as well as on major issues.

He now trails by an average of 5.2 percentage points in Ohio, 4.5 points in Virginia, 4.2 points in Nevada, 4 points in Iowa and 3.1 points in Florida, according to data compiled by the nonpartisan website RealClearPolitics.com.

He trails the president or is at best neck and neck on most economic issues in the eyes of likely voters in Ohio and Florida, according to a new poll for The Washington Post.

Romney on Wednesday was looking to boost his standing as he heads toward a potentially make-or-break showdown with Obama in the first of three debates next Wednesday.

Speaking at a rally in a high school gym in Westerville, Romney assailed the president for his stewardship of the troubled economy.

“Do we really want four more years where half the kids coming out of college can’t find work, college-level work?” Romney asked the more than 1,000 supporters in the audience.

“I don’t think we can afford four more years like the last four years.”

Ohio is crucial for Romney. No Republican has won the presidency without winning Ohio, and given the leanings of other states, there’s no visible electoral map strategy that the former Massachusetts governor can craft to win the White House without Ohio, analysts said.

“The math just doesn’t support it, and the Obama people know that if he (Obama) wins Ohio, it’s game over,” said David Cohen, a political science professor at the University of Akron.

Obama carried the state by 5 percentage points in 2008. But Republicans have made significant inroads in Ohio since then — taking back the governor’s mansion and winning more seats in Congress — giving them hope that the state would stay in the Republican column for Romney.

In Westerville, Jim and Rhonda Britt proudly wore Romney-for-president buttons and carried Romney signs. They struggled to understand why he seemed to be losing ground to the president in Ohio polls.

“I don’t think the polling is correct,” said Jim Britt, 55, who owns a Columbus delivery service. “I see more energy from Romney than I did from John McCain” when he ran for president in 2008.

“I don’t believe we can get very far with leaders who write off half the nation as a bunch of victims who never take responsibility for their own lives,” the president said.

“I think Obama is getting his message out. Romney is falling on his face,” said Blair. He was standing next to his granddaughters, ages 8 and 6, wearing matching homemade red Obama T-shirts.

On the stump in Ohio and in television interviews Wednesday, Romney sought to show a more personal side. To address questions about his compassion, Romney pointed to something he rarely talks about: his Massachusetts health care law.

“I think throughout this campaign as well, we talked about my record in Massachusetts, don’t forget — I got everybody in my state insured,” Romney told NBC’s Ron Allen in Toledo. “One hundred percent of the kids in our state had health insurance. I don’t think there’s anything that shows more empathy and care about the people of this country than that kind of record.”

Romney senior adviser Kevin Madden denied that the candidate was struggling to get back into the game in Ohio.

“Our plan to campaign hard all across Ohio and Florida is based on our belief that this is a close race,” Madden said. “You don’t need a poll to tell you that voters are concerned about the direction of the economy under President Obama.”

Obama campaign spokeswoman Jen Psaki said the election map appeared to be shifting toward the president and away from Romney. “The field is looking like it’s narrowing for them,” she said.