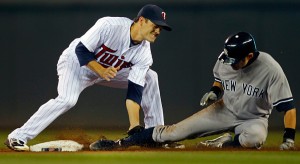 Minnesota Twins second baseman Jamey Carroll, left, tags out Ichiro Suzuki of the New York Yankees for the third out of the third inning as he is doubled off second on an Alex Rodriguez strike out at Target Field, in Minneapolis, Minnesota, on Tuesday, September 25, 2012.

MINNEAPOLIS—For the Minnesota Twins veterans who’ve been there through so many crushing losses to the New York Yankees, Tuesday night was sweet.

With the Yankees and Orioles battling for first place in the American League East, the Twins came from behind with four runs in the seventh inning, getting big hits by Denard Span and Joe Mauer.

Twins closer Glen Perkins gave up a ninth-inning home run to Andruw Jones but fanned Jayson Nix to preserve the 5-4 victory before an announced crowd of 33,346 at Target Field.

The Yankees lead the Orioles by 11/2 games and missed a chance to expand that lead after Baltimore lost to Toronto 4-0.

“It’s always good to beat the Yankees, no matter what time of year it is, even if it’s spring training,” Span said. “I used to love beating them, even in A-ball.”

New York held a 3-1 lead in the  seventh inning this time, when the Twins loaded the bases with one out against Yankees starter Phil Hughes.

Pedro Florimon struck out for a big second out, and Yankees manager Joe Girardi brought in lefthander Boone Logan to face Span.

Logan threw a slider in the dirt for a wild pitch, allowing Ryan Doumit to score from third. Then Span flared a two-run double to right-center, giving the Twins the lead.

“Boone had had a ton of success against Span, but it didn’t work,” Girardi said.

Mauer followed with an RBI single to right field, increasing the Twins’ lead to 5-3. That made Mauer 3-for-4, raising his average to .326 and leaving him only three points behind Miguel Cabrera for the American League batting lead.

Cabrera went 0-for-3 with a walk in Detroit’s 2-0 victory over Kansas City.

“I’m keeping an eye on (Cabrera’s average), when you’re eating and things like that, and the TV’s on,” Mauer said. “But I’m just trying to come out and do what I do and just trying to have good at-bats and play the game hard like I always do.”

Still, wouldn’t it be cool to win batting title No. 4?

“Oh absolutely, don’t get me wrong with that,” Mauer said. “You know, I’d love to win, but obviously if you start thinking about that, you start trying and that’s when it doesn’t happen for you.”

Mauer sure doesn’t seem to be flinching. He’s batting .418 in September, and the Twins are starting to embrace their role as spoilers. On Sunday they swept a doubleheader in Detroit, damaging the Tigers in their race with the White Sox.

“We’re just playing loose, man,” Span said. “We don’t have much to lose right now. We know what it’s like to be on their side, for Detroit and New York, and we’re going out there, we know the pressure’s on them, not us right now.”

Twins starter Esmerling Vasquez lasted six innings in a big-league start for the first time in his career, holding the Yankees to two runs on seven hits, with one walk and five strikeouts.