This news story was published on September 23, 2012.
Advertise on NIT • Subscribe to NIT 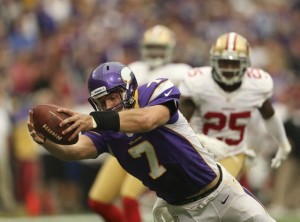 Christian Ponder scrambles 23 yards for the Vikings touchdown in the second quarter at Mall of America Field in Minneapolis, Minnesota, on Sunday, September 23, 2012. The Minnesota Vikings beat the San Francisco 49ers, 24-13.

MINNEAPOLIS — What are we to make of what we witnessed Sunday at Mall of America Field? How are we to process not only the end result of the Vikings’ 24-13 upset of San Francisco but the thoroughly convincing tenacity which that mauling was delivered?

Yes, it’s only one afternoon.

So it would be premature to assess that the Vikings have suddenly turned a corner on their race back to respectability. But perhaps what matters most about what unfolded Sunday is not how the outside world evaluates the dominance shown against a strong San Francisco squad but how the players and coaches do.

The floor is yours, Leslie Frazier.

“That’s a big win,” the Vikings coach said. “It validates the confidence that we have as a staff in our players. It should be something that hopefully we can build on the rest of the season.”

Your assessment, Chad Greenway, on that very crisp and determined effort?

“We feel like if we can replicate what we did today every week and be consistent, we have a chance to do something.”

Care to add anything, Kyle Rudolph?

“Definitely not (just another game). This was huge for us to springboard our season.”

Let’s make something clear. That sloppy Week 2 loss in Indianapolis could have thoroughly discouraged these Vikings. It did the fans.

Instead, that stumble seemed to stoke some sort of motivational fire. Veterans Brian Robison and Antoine Winfield were among those who addressed the entire team last week with variations of the same message.

Sure, this squad might still have a lot of maturing to do. But why sit back and accept mediocrity when there’s enough talent and energy to start plowing through the obstacles immediately?

“This week a lot of things were said that needed to be said,” Robison explained. “If we study and we invest and we play to our potential, we have a chance to be good around here. We’ve got a lot of guys here that, even though they’re young they’re talented. They hit, they run. And as veterans, we needed to carry them along and get them going.”

What transpired Sunday was the result of a hungry team making a statement. Many of them actually. Among them: No matter how strong the 49ers defense is, that didn’t prohibit the Vikings from throwing the first punch. It came by way of a 16-play, 82-yard march on the opening drive.

That series ended when Ponder, on a naked bootleg left, lofted a 1-yard, fourth-down touchdown pass to Rudolph.

Even with a fierce rush coming from Dashon Goldson, Ponder stayed calm, waiting for Rudolph to spring free.

Not once did the Vikings even think about settling for a field goal there.

“It would not have been good for us to back away from that challenge at that moment,” Frazier said.

Fueled by the quick start, the defense began its impressive afternoon by forcing a punt. That was made necessary after 49ers quarterback Alex Smith held the ball too long on third-and-6, giving Greenway a free 10-yard sprint to deliver the first of his two sacks on an energetic 13-tackle day.

Momentum only built from there and rarely subsided. During an afternoon in which the Vikings looked more like the mistake-free, established team, the defense held San Francisco to 89 rushing yards and forced three fourth-quarter turnovers.

And what about Leroy Guion’s blocked field goal in the final minute of the first half, which quickly snowballed into Blair Walsh’s 52-yard field goal as time expired?

Then, after San Francisco’s Kyle Williams returned the second half kickoff 94 yards to the Vikings 14, the defense held again, surrendering only 3 yards and three points.

Ponder had a hand in all three touchdowns. Perhaps most impressive was his 23-yard tuck-and-dash to the end zone in the second quarter. It was a run on which his first option — a screen fake to Percy Harvin with a hope to go deep to John Carlson — was taken away.

So Ponder looked down the center of the field and morphed into Tom Hanks.

“Run, Forrest, run,” he joked after the game, also adding, “I saw a big running lane and figured that if my white legs were fast enough, maybe I would get there.”

That “What the heck?” mentality is just what this team needs and showed all throughout Sunday, serving notice it’s ready to accelerate the maturation process.