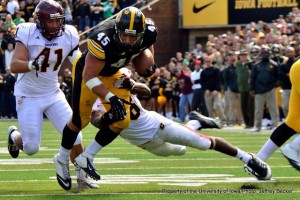 Mark Weisman rumbles for some of his 217 rushing yards against CMU.

Here are the post-game notes:

Mark Weisman scored on a 34-yard rush on a fourth-down play in the first period.  The rush is the longest of his career and the longest by a Hawkeye rusher this season (27 by Damon Bullock vs. UNI).  Weisman also had a 5-yard rushing score in the third period, and a 12-yard rushing touchdown in the fourth quarter.  The scores are Weisman’s fourth, fifth and sixth of the season; he had three TD’s last week versus UNI.  Weisman finished the game with a career-high 217 yards on 27 attempts.  The sophomore topped the century mark rushing the last two games (113 last week versus UNI).  His 217 yards today ties for the eighth –best in Iowa single-game history (Shonn Greene, Nick Bell).

PK Mike Meyer made 4-4 PATs today extending his consecutive streak made to 63, which breaks Nate Kaeding’s consecutive PAT’s school record of 60 established in 2001-02.  Meyer tied Kaeding’s record of 60 straight PAT’s on Iowa’s first drive of the game and broke the record on Iowa’s third possession of the first quarter.  The junior was also 1-1 in field goal attempts (46 yards) today; he is 9-of-10 this season.  Meyer now has 193 points, surpassing Tim Dwight (1994-97) and Ronnie Harmon (1982-85) for ninth in career scoring.  Meyer has made 37-of-47 career field goal attempts.

Iowa’s defense failed to collect a takeaway for the first time this season.  The Hawkeye defense has collected at least one takeaway in 67 of its last 78 games, dating back to 2006.  Central Michigan recovered an Iowa fumble, the Hawkeyes’ first of 2012, in the first period.  The Chippewas turned the Hawkeye miscue into three points.  The Chippewas and Iowa State are the only opponents to have forced any Hawkeye turnovers in 2012.

DE Joe Gaglione recorded a sack today.  The senior has three of the Hawkeyes’ five sacks this season.

He had 19 versus Iowa State and 10 against UNI the previous two games.

After allowing six sacks in the season opener, the Hawkeye offensive line has not allowed a sack the last three games.

Instant replay was used once today. Officials reviewed whether or not the CMU quarterback was beyond the line of scrimmage on a forward pass. The play was not overturned and the call on the field stood.

Iowa remains at home next week when it hosts Minnesota in its Big Ten opener at 11 a.m. (ESPN or ESPN2) inside Kinnick Stadium. It will mark the first time Iowa will have ever played Minnesota in September.

One Response to Iowa drops close game to CMU, 32-31