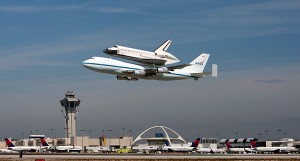 LOS ANGELES — It was an air show to end all air shows, a spectacle that saw California crane its collective neck to the sky in wonderment.

The space shuttle Endeavour, perched atop a modified 747, captivated millions on a pre-retirement tour of the Golden State on Friday, bringing an end to NASA’s space shuttle program in dramatic style.

Endeavour flew as low as 1,500 feet past photo-op perfect California landmarks and cheering crowds. While many were glued to their televisions, thousands of others grabbed smartphones and cameras and experienced the flyover in person from atop Los Angeles skyscrapers, on hillsides and in backyards.

The 105 Freeway near Los Angeles International Airport was shut down as motorists simply stopped their cars, got out and took snapshots.

After taking off from Edwards Air Force Base on Friday morning, Endeavour headed north, buzzing the state Capitol in Sacramento, circling the Bay Area and soaring over a Golden Gate Bridge packed with onlookers.

As the sound of the plane’s engines drowned out the traffic on the bridge and tourists ran to get the best vantage point, screams of “Whooo!” could be heard as the shuttle flew over the bridge.

“It was unbelievable. Did you hear all the clapping? I can’t even believe we’re here!” said Polly Lestikow, of Centennial, Colo., who just happened to be bicycling across the bridge Friday morning, unaware of NASA’s planned show.

Then it turned south, crossing the Monterey Peninsula on its journey to Los Angeles, where Endeavour took one last lap around Southern California, the cradle of the nation’s 40-year shuttle program.

“This gives you goose bumps, man,” said Terry Hughes, 72, a retired Boeing engineer who spent his career working on wind tunnel tests for the shuttle. “The same goose bumps I had when I saw it land for the first time.”

For an hour Friday, Endeavour was seemingly everywhere at once: Flying by the Griffith Observatory, the Hollywood sign, the Getty Center, the Queen Mary and Disneyland. Parading down the coast from Santa Barbara to Huntington Beach. Cruising past NASA facilities and factories where it was designed, built and assembled.

In downtown Los Angeles, City Council members suspended their meeting so they could watch the shuttle soar over City Hall. The 27th-floor observation deck was packed.

“It looked almost angelic to me,” said Lydia Charkhian, 54, of Glendale. “It was like watching a dove in flight.”

It was a surreal, emotional experience — the veteran of 25 space missions circling slowly in the sky like a 175,000-pound ballerina followed by two escort jets.

“I got chills,” said Dave Atkinson, an El Segundo councilman as the shuttle flew overhead. “This is America at its finest.”

It was quite the show. And to get the best seats, you had to show up early.

Along the bluffs in El Segundo, dozens of people arrived as dawn broke. They were greeted by those who had camped out.

One solutions-oriented woman who arrived too late to find a spot on the crowded hilltop left — only to return with a 9-foot ladder.

Patrick Hill, 53, of Sunland, came to honor his father-in-law, who died in March and worked on the shuttle at its assembly plant in Palmdale, Calif.

“He would be proud to see this,” Hill said. “I’m overwhelmed. He loved this stuff.”

At Griffith Observatory, hundreds of people jockeyed for the best photo spots before the sun rose. The parking lot was filled to overflowing more than three hours before Endeavour’s arrival.

Greg Low pulled his daughters, Crystal and Kiana, from school to see the historic flyover.

“It’s an educational field trip,” Low said. “They can learn about this in a classroom, but it’s nice to see it fly.”

For others, though, Endeavour’s arrival in Los Angeles was a bittersweet moment, a final salute to a shuttle program they believe ended prematurely.

At the Proud Bird restaurant at LAX, Ron Wade had driven some 1,400 miles from Wichita, Kan., to witness the homecoming. He’d worked on the shuttle as a high school senior, part of a vocational training program at Rockwell International.

“It’s a sad homecoming,” said Wade, who traveled to Florida for Endeavour’s final launch into space in 2011. “She should be in space. She was built for 100 (missions). She was retired way too soon. … All of the shuttles, I feel like they are my children.”

At Disneyland, scores of people gathered outside the entrance to the park, cameras and phones poised.

“We’re not even going to the park. We just came here for this,” said Gail Vincent of Mission Viejo, who waited with her husband, Dan. “Dan’s cousin worked for NASA and told him this was a must-see event.”

Shuttle sightings from points across the area lit up Twitter.

“Just flew over my head!!!” tweeted actor Tom Hanks, who played Apollo 13 Cmdr. Jim Lovell in the movie about the stricken mission. “Don’t see this every day. Never will again. The Spaceman in me just went berserk.”

A school playground at the California Science Center exploded in screams as Endeavour came into view. Hundreds of children ran, pointing and squealing, trying to chase the shuttle as it flew by.

“That was awesome,” said fifth-grader Yaslynn Thomas, who stared into the sky long after it was gone. “I never thought a space shuttle would ever come to a school. I always thought it would go to a special space landing place.”

Her school is located on the campus of the museum, which will be shuttle’s permanent home after it’s transported to the Samuel Oschin display pavilion next month through the streets of Inglewood and L.A. — the final curtain call on Endeavour’s farewell tour. A two-day parade from LAX to the California Science Center is scheduled to begin Oct. 12. The move prompted officials to cut down hundreds of trees and remove light standards to accommodate the large spacecraft. New trees will be planted later.

Garrett Reisman came to LAX to watch the shuttle with both the past and present on his mind. He first flew on Endeavour in 2008, when he went to space for the first time. He left NASA 18 months ago and now works at SpaceX and lives in Manhattan Beach.

He says having a shuttle at the Science Center will inspire future generations, but he’s especially excited about the opportunity to take his 18-month-old son to see Endeavour.

“I can take my son to see my spaceship,” he said. “That will be very cool. … He’ll grow up with Endeavour in his backyard.”