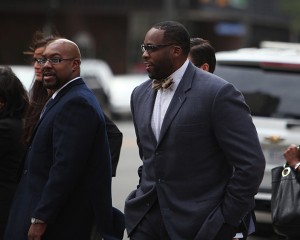 “No deal without me.”

“These are the words of the defendants sitting behind me.”

Chutkow told the panel Kilpatrick; his father, Bernard Kilpatrick; his longtime contractor friend Bobby Ferguson and ex-city water boss Victor Mercado ran a scheme that relied on rigging water contracts and shaking down contractors to steer money into their own pockets. They said Ferguson made $120 million from city projects while his friend was in office and then shared the money with the others.

“They made themselves rich by taking money from” Detroit, Chutkow said.

He said they put fear into other contractors through this philosophy: “You had to hire Ferguson if you wanted in on a city (contract). … And it worked well.”

“You’re going to learn about the power of the nuclear bomb,” Ferguson’s lawyer Gerald Evelyn told jurors. “It’s landed on everybody … and my client’s life is at stake.”

Evelyn also criticized the government’s evidence, saying the text messages and photographs of money are only being used “to get your blood going and to get your suspicions cooking.”

“This case is built on a foundation of nothing — of Jell-O,” Evelyn said.

The prosecution told a different story.

In a 45-minute opening statement, Chutkow told the jury the members of the so-called Kilpatrick Enterprise lived large by tapping into the lucrative water department after “everyone figured out that the water department with its $1 billion budget had the deepest” pockets.

Chutkow also disclosed a new story about a $90,000 cash gift that he said was stuffed into a vacuum cleaner and then given to Kilpatrick after he resigned from office. Chutkow said the money came from Ferguson, who gave the cash to an old friend of Kilpatrick’s before it was hidden and then delivered to the former mayor in two transactions. The friend gave him half the money in Texas, the other half in Detroit.

Chutkow said Kilpatrick also siphoned more than $561,000 from the Kilpatrick Civic Fund, which was supposed to help Detroit youth, and used it for personal expenses. That included $100,000 given to ex-mistress Christine Beatty as a “soft landing” when she resigned from her job in his office following the text message scandal.

Kilpatrick’s lawyer James Thomas was the first defense lawyer to speak after the government laid out its case.

“We’ve all heard a lot of stories before … we just heard another one,” said Thomas, who told the jurors not to expect much more from the government from here on out. “That’s as good as it’s going to get.”

Thomas said the defense would offer a “complete picture” of what really happened and “not just snippets of what actually occurred.” He also accused the government of overcharging the defendants, saying: “They threw in everything but the kitchen sink here.”

Thomas criticized the government’s cooperating witnesses, including one he called a gambling addict who can’t be trusted and another who suffers from dementia.

He also lambasted one of the government’s key witnesses, Derrick Miller, Kilpatrick’s high school friend and former top aide who was charged in the case but cut a deal in exchange for his cooperation. Thomas called him a “greedy underling” who is just trying to help himself.

“This man’s life has been laid out for everyone. You know about his affair. You know he had to go to prison,” Thomas told the jurors.

Still, he urged them to set that aside and judge him only on the facts presented at trial. He also defended his client’s reputation, saying: “He embodied the idea of good government, of providing necessary services for the city of Detroit. Cut the grass. Keep the lights on and make sure the police are there.”

Martin Crandall, Mercado’s lawyer, had a different legal strategy from the others. He painted Mercado as an outsider who was ridiculed and alienated by Kilpatrick’s inner circle.

“Victor’s not in the loop. He’s not in the circle of trust,” Crandall said, repeating that phrase several times for jurors.

Crandall painted Mercado as a hardworking son of immigrant parents who worked his way up the ladder, earned six-figure salaries running water departments worldwide. He eventually wound up working as a clerk at a hardware store after the indictment.

During his years in Detroit, Mercado was not part of any conspiracy to make money off rigged water contracts. He earned only his $240,000 salary, Crandall said.

“Victor never got a dime, not a penny, not an illegal dollar,” Crandall said, later adding his client also never took any bribes or kickbacks. He cited one instance in which someone looking for a city contract tried to give Crandall a free plane ride, but that Mercado rejected it.

Crandall said his client should never have been named in what he called the “blockbuster count.”

“Racketeering is the government’s nuclear bomb because it has huge consequences,” Crandall said, later telling jurors Mercado got caught up in something he had nothing to do with. “Victor came here at the wrong time and got caught up in this agenda that wasn’t his … He’s got to go home free to his wife. … He needs to be let go.”