Barney and DeJesus lift Cubs, who are trying to avoid 100 losses 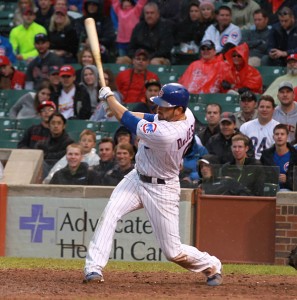 The Chicago Cubs’ Davis DeJesus singles in Brett Jackson with the game-winner in the 11th inning against the St. Louis Cardinals at Wrigley Field in Chicago, Illinois, on Friday, September 21, 2012, 2012. DeJesus’ hit lifted the Cubs over the Cards, 5-4.

CHICAGO — This Cubs-Cardinals rivalry isn’t quite what it used to be, as shown when only 29,100 tickets were sold for Friday’s 5-4, 11-inning Cubs’ victory at cold and damp Wrigley Field.

Not only are there two first-year managers in Dale Sveum and Mike Matheny, but players who haven’t experienced the hey-day of the bitter rivals.

“Obviously we have a lot of young guys on the team so right now it has to be built up a little bit, but a rivalry is a rivalry,” Sveum said. “It’s more that it’s a big game for us to get closer to our goal and to knock somebody possibly out of the playoff.”

The Cubs’ goal is to avoid 100 defeats, which they are now within four victories of achieving with 11 games remaining. The Cardinals are leading for the second National League wild-card playoff spot, but Friday didn’t help their chances.

The game was sent into extra innings by a pumped-up Darwin Barney with a two-out, two-strike, two-run homer in the ninth, then won on a David DeJesus single.

“If we’re not playing a contender, you’re not as excited as you are (after the homer),” Barney said. “And that’s what’s fun for us right now. We played our way out of it early and we have a chance to play games that matter to somebody.”

Thanks: Barney’s NL record for errorless games for second basemen reached 136 games, but not without the help of first baseman Anthony Rizzo, who dived for a bad throw and still stretched his foot to the bag while lying prone for an out.

Rest coming: Once the Cubs are done with the Cardinals, the regulars will get days of rest against non-contenders, according to Sveum.

“We’ll get some other guys playing time and (do) evaluating a little bit,” he said.

That may not include Barney.

“I don’t think Barney is going anywhere in the lineup, with the day off Monday,” Sveum said. “There’s no reason to give him rest. He has battled through it and had a heck of a season.”

Sveum also said he would sit down with each player during the final series against Houston to give them an idea of where they stand and what they need to do during the winter.

Extra innings: Alberto Cabrera became the sixth Cubs pitcher to win his first game this season with a scoreless inning. All three victories this homestand have come on first victories, the other two from Jeff Beliveau and Chris Rusin. … Alfonso Soriano drove in his 104th run, matching his 2005 career high with the Rangers. … Starter Chris Volstad allowed three runs in five innings, the fifth straight game he failed to complete six innings. … Shawn Camp set a career high with his 76th appearance.