A house within a house for Grandma 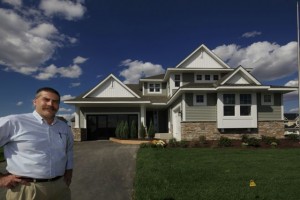 Bill Burgess of homebuilder Lennar shows the company’s NextGen home which is aimed at families with multiple generations living together. He is shown on Septmber 5, 2012, in Maple Grove, Minnesota.

MINNEAPOLIS — Get ready, kids: Grandma’s moving in. Maybe Grandpa, too.

That’s the hope, anyway, at the Bonaire housing development in Maple Grove, Minn., where the hammers are flying as crews put the finishing touches on a model house that includes a completely self-contained, one-bedroom apartment aimed at buyers who want a dedicated space for the parents, in-laws or their grown children.

It’s being built by homebuilder Lennar Corp., which says it’s the first production builder to offer multigenerational buyers a house-within-a-house complete with its own entrance and garage.

“In this market it will be a game changer,” said Lennar’s Minnesota division president, Bill Burgess. “It gives people another opportunity to change the way they retire.”

It’s all part of a growing trend that’s expected to have a big impact on the way builders design and sell homes in the coming years as social and economic shifts change the way people live. It’s also a way for Lennar to increase home sales. Builders are still digging their way out of the worst downturn since the Great Depression, and it gives buyers a fresh option at a time when there hasn’t been much innovation.

To be sure, multigenerational living is nothing new. For years, people have found creative ways to make space in their house for a friend or relative. The concept is a mainstay in many parts of the world, especially in places where housing is expensive. In the U.S., multigenerational living was relatively common until a suburban building boom helped make housing more affordable.

The Pew Research Center said the trend is on the upswing. Last year, almost 17 percent of Americans lived in multigenerational households, including households with parents and adult children, as well as skipped generations with grandparents and grandchildren. That’s up from 12 percent in 1980.

The primary driver in recent years is economic. The recession forced many families to double up to save money, and a tough job market meant that many college grads had to move home. The Pew report showed that the trend actually helped reduce the poverty rate. There’s been a cultural shift, too, by way of new entrants to the U.S. who are more accustomed to such arrangements.

Stephen Melman, director of Economic Services for the National Association of Home Builders, called it an “underserved market,” and said that a significant portion of these households have the buying power to choose high-quality housing that specifically meets their needs. Future growth of multigenerational households largely depends on the direction of the economy, he said.

“If the recovery is in full gear two years from now, the college students will move out, as will other relatives,” he said. “Immigration trends could dictate the second part of the demand. If more high-income people come to the U.S. for good jobs, that would foster more demand for multigenerational households.”

At its sprawling subdivision amid the rolling cornfields in a developing corner of Maple Grove, Lennar hopes to be on the front edge of the trend with its “Next Gen” series.

Wendy Danks, director of marketing for the Builders Association of the Twin Cities, said that for years builders and their clients have been coming up with clever ways of accommodating a relative within their existing floor plan, often by transforming an unused office or bedroom and nearby bathroom into a separate suite.

Pulte Homes, for example, offers several plans that allow buyers to customize the plan to fit their family’s needs. Pulte’s Marv McDaris said that its Newberry plan, for example, has a first-floor “flex room” that can be used as a study or library, but has a closet and adjacent bathroom with a shower and can easily be used as its own living suite.

“Through our research and experience with prospects and buyers in the Twin Cities, we have seen demand for spaces to accommodate multigenerational needs and we expect that demand to continue,” McDaris said.

Danks said that in new houses, the concept is more common in upscale custom-built houses like the 6,300 square-foot house with its own mother-in-law suite that was featured on a Parade of Homes tour a couple years ago.

Burgess said that the idea was recently launched in Arizona. The company quickly sold about 100 of those plans, giving the company the confidence to bring it to other markets.