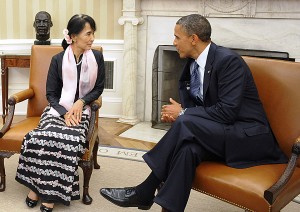 The Obama administration not only welcomed the former political prisoner and Nobel laureate, but it offered a gesture of goodwill by easing sanctions against Myanmar’s leaders, as Suu Kyi has urged since she arrived Monday on a 17-day U.S. tour.

The Treasury Department announced that it would remove President Thein Sein, a former general, from a list of people banned from doing business or owning property in the United States. Sein is scheduled to arrive in New York next week to address the U.N. General Assembly.

The leader in Myanmar’s lower house of parliament, Thura Shwe Mann, also was removed from the list.

The two “have taken concrete steps to promote political reforms and human rights, and to move Burma away from repression and dictatorship toward democracy and freedom, warranting today’s de-listing action,” David S. Cohen, undersecretary of state for terrorism and financial intelligence, said in a statement.

Suu Kyi was released from 15 years under house arrest in late 2010 and was elected to the Myanmar National Assembly in April. In May, the Obama administration began removing unilateral sanctions on the nominally civilian government and later allowed U.S. investment to flow to Myanmar, also known as Burma.

“I stand here strong in the knowledge that I am among friends,” Suu Kyi said in the Capitol Rotunda as she finally accepted the Congressional Gold Medal, which Congress awarded her in absentia in 2008 when she was still confined in Myanmar.

The honor was “a moment for which I have been waiting for many years,” Suu Kyi said.

Secretary of State Hillary Rodham Clinton, who first met Suu Kyi at her lakeside home in Yangon in December, embraced her and praised her for “moving from icon to politician” willing to work with her former jailers to help create civil institutions and democratic reforms.

“This is a truly special day at the Capitol,” he said. “It’s been a long time coming.”

Suu Kyi’s meeting with Obama was announced just hours before she arrived at the White House, and they met in the Oval Office behind closed doors, without making remarks to reporters. The delicate protocol was intended to distinguish a visit from Suu Kyi, now head of Myanmar’s opposition party, from that of a head of state.

But Obama lined up with other U.S. leaders to shower praise on the famous dissident. The president views Suu Kyi as “somebody who has been a remarkable beacon for democratic reform in her country and for her people,” White House spokesman Jay Carney said.