Cardinals turn back Astros to edge closer in wild-card race 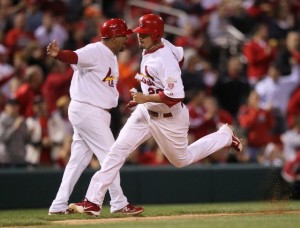 The St. Louis Cardinals’ Kyle Lohse rounds third base past third base coach Jose Oquendo as he scores on a double by Jon Jay in fifth-inning action against the Houston Astros on Tuesday, September 18, 2012, at Busch Stadium in St. Louis, Missouri.

ST. LOUIS — It might be hard to sell Cardinals righthander Kyle Lohse as the leading Cy Young Award contender in the National League, but he’s in the conversation.

Lohse, who has the top winning percentage among major league starters at .833, gained his 15th win in 18 decisions Tuesday night as he helped nudge the Cardinals a tad further ahead in the race for a wild-card playoff spot.

Allowing four hits and no runs in seven innings, Lohse pitched the Cardinals to a 4-1 win over the Houston Astros at Busch Stadium, shoving the Cardinals 1½ games in front of the Los Angeles Dodgers, who were rained out at Washington.

Dickey is second in wins with his 18-6 record, first in earned run average at 2.67, second in strikeouts at 205 and third in opponents’ batting average at .223.

Gonzalez is first in wins at 19-8, first in opponents’ batting average at .207 and fourth in strikeouts at 196.

But Lohse has the best winning percentage and tied for second with Kershaw in ERA at 2.71.

And he can hit. A little. Prospective free agent Lohse knocked in only his third run of the season when he chopped a high hopper, good for a double, over the head of third baseman Matt Dominguez to help spark a two-run fifth inning. Lohse is six for 60 (.100) as a hitter.

For the Astros, the magic number is 100, the number of losses they have suffered this season, marking the second year in succession they have reached the century level.

Lohse, making a fourth bid for his 15th victory, allowed a one-out double to Scott Moore in the first but pitched out of trouble by getting former Cardinals No. 1 draft pick Brett Wallace on a popup and fanning Justin Maxwell.

The Cardinals got their first look as a starter of converted reliever Fernando Abad, who entered with an 0-4 record and 5.08 earned run average. The Astros’ lefthander immediately put himself in a spot by hitting leadoff man Jon Jay with a pitch. But Abad then got himself out of that spot by fanning Carlos Beltran and Matt Holliday, with catcher Jason Castro throwing out Jay trying to steal second as the back half of Holliday’s strikeout.

But the Cardinals broke through with a run in the second. With one out, Yadier Molina doubled to left and motored to third when left fielder J.D. Martinez allowed the ball to roll around the wall and past him.

David Freese popped up but Daniel Descalso, just seven for 80 with men in scoring position (.104), singled to right to score Molina. That advanced the lefthanded-hitting Descalso’s average against lefthanders to .298. He was hitting .198 against righthanders.

Lohse issued a leadoff double to Matt Dominguez in the third but allowed Dominguez to move no farther than second base. Abad tapped out, Jose Altuve grounded out and, after Scott Moore walked, Lohse retired Wallace on a fly to center.

Molina, as he has done all season, made things easier for his pitcher in the fourth after Lohse walked Maxwell to start the inning. The Cardinals’ Gold Glover gunned down Maxwell trying to steal second, running his chart to 29 caught stealing in 65 attempts (45 percent) this season.

Lohse helped give himself some space in the fifth as the Cardinals bracketed three consecutive extra-base hits. Rookie Pete Kozma gapped a one-out triple to right center as the Astros’ outfielders couldn’t close on his liner. With the Astros in a bit for a possible squeeze, Lohse chopped a ball over Dominguez and legged it into a double as Kozma scored.

Then Jay, who had two hits and two runs batted in, doubled to left center to score Lohse and it was 3-0.

Lohse gave the Cardinals’ dugout and the Busch attendees a bit of a fright in the sixth when he slipped and fell in delivering a pitch to Moore but he remained in the game to complete his third perfect inning out of the first six.

The Cardinals missed a chance to add in the sixth when Holliday walked and Molina slashed a one-out single off the arm of second baseman Altuve, with Holliday going to third. But Freese grounded into a round-the-horn double play.

Lohse danced around two singles in the Houston seventh before the game was turned over to the bullpen. But not until after Jay had singled home Descalso, who had walked and moved to second on a groundout, to give the Cardinals a 4-0 lead after seven.

Righthander Mitchell Boggs, who was unavailable Sunday because of back spasms, returned to his normal eighth-inning role but allowed singles to Jimmy Paredes and Altuve to open the inning. After Boggs retired Moore on a fly to center, the Astros scored their first run on Wallace’s broken-bat single to left. Boggs struck out Martinez on a full-count pitch and then manager Mike Matheny brought in lefthanded reliever Marc Rzepczynski to face switch-hitting Jed Lowrie, just a .195 hitter against lefthanders.

Lowrie lofted a possible single to right but Shane Robinson, who just had come into the game, made a strong running catch.