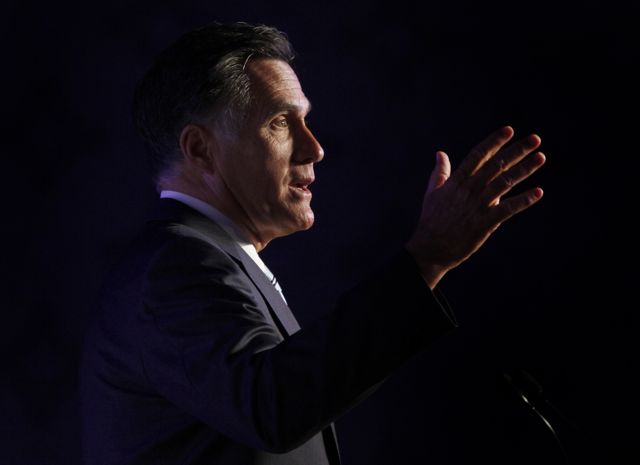 LOS ANGELES — Mitt Romney’s presidential bid, already pushing back against suggestions that he was losing ground to President Barack Obama, confronted more difficulty Monday when a secretly taped video showed him describing nearly half the nation’s population as “dependent on government” and unwilling to take responsibility for their lives.

The comments were made at a private fundraiser earlier this year and published Monday by the news organization Mother Jones. In the video, whose authenticity the Romney campaign did not dispute, the Republican nominee told donors that he doesn’t need to worry about supporters of Obama, who rely on government services and pay no income tax.

“There are 47 percent of the people who will vote for the president no matter what. All right, there are 47 percent who are with him, who are dependent upon government, who believe that they are victims, who believe the government has a responsibility to care for them, who believe that they are entitled to health care, to food, to housing, to you-name-it,” Romney said. “That-that’s an entitlement. And (they think) the government should give it to them. And they will vote for this president no matter what … These are people who pay no income tax.”

Romney said he would focus on unaligned voters and not on Obama backers.

“(M)y job is not to worry about those people,” Romney said. “I’ll never convince them they should take personal responsibility and care for their lives.”

The Obama campaign called the statement “shocking” and said Romney had slandered needy Americans, among others.

“It’s hard to serve as president for all Americans when you’ve disdainfully written off half the nation,” said Obama campaign manager Jim Messina.

Romney aides did not directly address the video, saying in response to its release that the GOP nominee is committed to helping all Americans and that he has long been dismayed by the country’s growing dependence on government, such as the unprecedented number of people who receive food stamps.

“Mitt Romney’s plan creates 12 million new jobs in four years, grows the economy and moves Americans off of government dependency and into jobs,” spokeswoman Gail Gitcho said in a statement.

But the comments were dangerous to the former Massachusetts governor’s effort on at least two fronts. They ran counter to Romney’s argument that he would better serve Americans seeking work than Obama, whom he blames for persistently high unemployment.

And they also placed Romney, a wealthy former venture capitalist, in the position of appearing to belittle those with far fewer financial resources than he enjoys. His argument that nearly half of the American population pays no income taxes is accurate, but it does not note that many pay other taxes, including the federal payroll tax, state taxes and local taxes. Most of those who pay no taxes at all are either destitute, disabled or elderly. (Romney, too, has been criticized for paying far less in income taxes, percentagewise, than many middle-class workers because most of his income derives from investments, which are taxed at a lower rate than earnings.)

The video’s release came at an already fraught time, amid news articles detailing internal dissent among Romney’s top advisers, and questions about the effectiveness of his economic message.

Romney and his advisers have frequently said that the candidate would not offer much in the way of specifics to avoid giving his rivals ammunition. On Monday morning, after a weekend of leaked grievances by his top advisers, campaign officials reversed field and told reporters that Romney would now begin offering new details about tax and economic policy.

“We think the American people are looking forward to hearing how we can turn our economy around; they’re open to hearing our proposals on this front,” Romney senior adviser Ed Gillespie said.

Hours later, Romney addressed 1,400 people at a Los Angeles conference of the U.S. Hispanic Chamber of Commerce, promising to cut federal spending, help small businesses and to reform a “broken” immigration system. But he offered no new details on how he would accomplish those goals, notably declining to say what he would do with the 12 million people living in the nation illegally, a key concern among Latino voters. Instead, Romney argued that Latinos have been particularly hurt by Obama’s economic policies, reeled off a list of Latino politicians who are Republicans and reiterated that as president he would create jobs.

The lack of specificity was noted by those in attendance.

“I would have loved to hear a little more detail about how he plans to help American businesses, but I understand he had limited time,” said Hispanic Chamber CEO Javier Palomarez.

The videotaped Romney speech, however, quickly buried the candidate’s message. Mother Jones’ Washington bureau chief, David Corn, told MSNBC that the fundraiser occurred in May at the Boca Raton, Fla., home of Marc Leder, the co-CEO of Sun Capital Partners, a private equity firm. The video could not be independently verified by the Los Angeles Times.

In the recording, Romney told the crowd that his father was born in Mexico to American parents, and joked that he would have a better shot at winning the presidency if his grandparents were Mexican. He conceded that he was having trouble winning over Latino voters, who side overwhelmingly with Obama. And he outlined a campaign tactic of deeming the president as “in over his head” — rather than an abject failure — in order to appeal to swing voters who supported Obama in 2008 but are disappointed by his tenure.

Politicians are frequently more candid when speaking at fundraisers that are closed to the media than they are at public events, offering up inside takes on their campaigns, their policies and their world views to supporters who have paid handsomely to see them.

Obama found himself in a similar circumstance in 2008, when he was covertly taped at a San Francisco fundraiser saying that “bitter” small-town voters “cling to guns or religion.” Hillary Rodham Clinton, then a rival for the Democratic nomination, hammered Obama with his words, and he was forced to apologize.

The words have lived on in the 2012 campaign, with Republicans continuing to use them against him. Vice presidential nominee Paul Ryan did so Monday in Iowa.