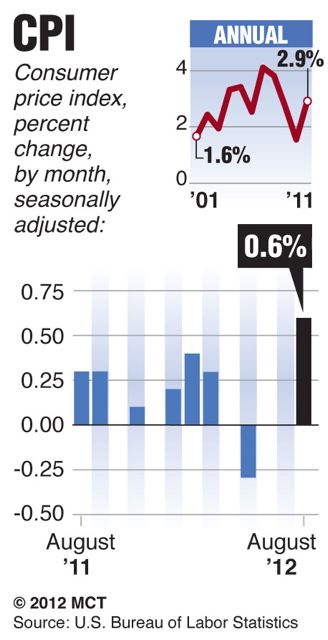 WASHINGTON — The gas pump helped the economy last month, and also hurt it.

But the increase in fuel costs also caused the cost of living to go up 0.6 percent last month — the largest move since June 2009, according to the Labor Department.

The rise in gas prices was a major factor in the improved August retail sales, said Steven Ricchiuto, chief economist at Mizuho Securities. The overall 0.9 percent monthly increase would have been just 0.3 percent without gas station sales, he said.

Likewise, gas prices bumped up the August consumer price index. About 80 percent of the increase was because of a rise in the gasoline index, the Labor Department said.

Inflation had been flat in July. But even with the recent increase in gas prices, inflation in the previous 12 months was 1.7 percent, below the Federal Reserve’s target of 2 percent.

The so-called core inflation rate, which excludes volatile energy and food prices, was up just 0.1 percent in August and 1.9 percent for the previous year.

“These data points highlight the fact that the spike in gasoline is a bigger growth concern than an inflation driver,” Ricchiuto said.

Inflation concerns have increased after the Federal Reserve on Thursday announced a new round of bond-buying to stimulate the economy. Some analysts worry about the effect on consumer prices of the central bank’s plan to pump more money into the economy by purchasing $40 billion of mortgage-backed securities every month until unemployment improves substantially.