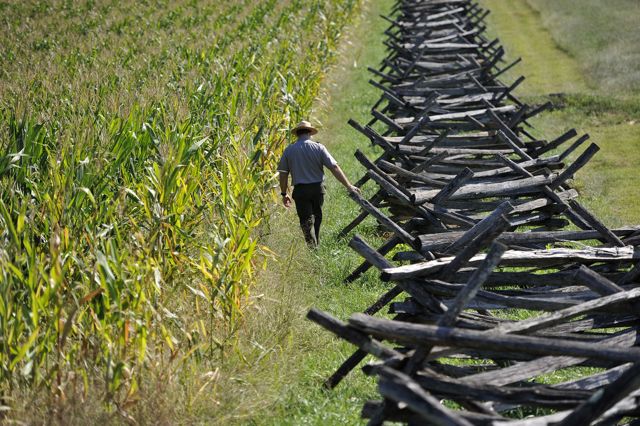 By Michael Dresser, The Baltimore Sun –

The fighting that killed or wounded 21,000 Americans in the rolling hills of western Maryland was over in about 12 grisly hours.

But a century and a half after the bloodiest day in American military history, the struggle to preserve the ground where Union and Confederate soldiers fought the Battle of Antietam only now appears close to a declaration of victory.

As Americans gather to honor the sacrifice of those who fell Sept. 17, 1862 — as they are doing this weekend and Monday on the 150th anniversary — they will do so at one of the nation’s best-preserved Civil War sites.

Unlike many of the places where Union and Confederate forces clashed, Antietam offers visitors the opportunity to view the terrain much as it appeared at the time — without the visual clutter of the 20th and 21st centuries.

The prospects for Antietam’s preservation didn’t always appear so hopeful. For three straight years, 1989 to 1991, the National Trust for Historic Preservation listed Antietam among its 11 most threatened historic places because of encroaching development.

Now the National Trust considers Antietam a model of public-private cooperation to preserve historic land — not just on the battlefield, but in the surrounding area.

“At Antietam, the context for the battlefield also is conserved,” said Rob Nieweg, director of the trust’s Washington field office. “The public in 2012 or 2050 will have the opportunity to envision what happened here.”

Antietam was a turning point. Coming after a string of Union defeats at the hands of Gen. Robert E. Lee, it was just enough of a victory to allow Abraham Lincoln to issue the Emancipation Proclamation from a position of strength. That act, freeing the slaves in the rebellious states, changed the character of the war and the country.

The battle was the culmination of a campaign in which Lee — fresh off his successful defense of Richmond and a brilliant victory at Second Manassas in Virginia — launched an invasion of Maryland, a slave state he believed was ready to be detached from the Union.

Antietam was hell in three phases.

At the Cornfield, where the battle started at dawn Sept. 17, it is still possible to envision the rustling of fully grown stalks as thousands of attacking Union soldiers moved toward the clearing where Confederate defenders waited to mow them down.

Union troops pushed as far as the historic Dunker Church — now restored — before being thrown back by a counterattack by well-concealed Confederates in the West Woods. The back-and-forth fighting was as deadly as any engagement of the war; one Texas regiment emerged with 82 percent of its soldiers dead or wounded.

At the Burnside Bridge, where the Union launched its third attack of the battle, fighting continued through the afternoon. Viewing the bridge today, it is easy to imagine the terror of young Northerners ordered to cross Antietam Creek on a narrow span with the enemy shooting down from the heights.

But the eventual Union breakthrough at the bridge left the exhausted Confederate Army in peril. It was only the late arrival of 3,000 troops under Confederate Gen. A.P. Hill, who had made a 17-mile march from Harpers Ferry that day, that saved Lee’s army.

In the 1890s, Antietam became one of the first five Civil War battlefields — along with Gettysburg, Vicksburg, Shiloh and Chattanooga — to be put under the administration of the War Department as a park. At the time, said Brian Baracz, a National Park Service ranger, one of the chief reasons given was to set aside these places as outdoor classrooms for students of military science.

For many years, the National Park Service, which took over the park in the 1930s, owned only a fraction of the most sensitive sites. But in the two decades since the National Trust’s warning, the pace of acquisition picked up as the federal government increased funding. Baracz said the park service now owns about 2,100 acres in the core battle area — over half of which was acquired in the last 12 to 15 years.

While the park service was increasing its holdings in the core battle area, state officials and private conservation groups were moving aggressively to protect the approaches to Antietam and South Mountain from intrusive development.

Lighthizer said he’d like to see some of the 1950s-era ranch homes that line Route 65 overlooking the battlefield acquired and torn down. Eventually, he’d like to see the visitor center built at the heart of the battlefield; in 1961 it was moved to a less central location. But he sees no imminent threat of a subdivision or strip mall popping up where armies once clashed.

“Antietam is 95 percent of the way there,” he said.