This news story was published on September 16, 2012.
Advertise on NIT • Subscribe to NIT 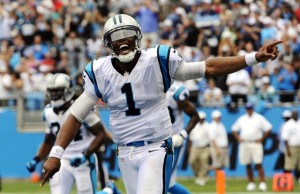 By Joseph Person, The Charlotte Observer –

CHARLOTTE, N.C. — New Orleans quarterback Drew Brees and the rest of the Saints’ starters played into the fourth quarter again.

But the Saints were not chasing records Sunday – just a comeback that failed to materialize.

Cam Newton led a balanced offensive attack by accounting for more than 300 yards and two touchdowns and the Panthers intercepted Brees twice, including one by linebacker Jon Beason in the final minute that sealed the 35-27 win at Bank of America Stadium.

The win was the Panthers’ first against the Saints (0-2) since the 2009 season and evened their record at 1-1, four days before the reigning Super Bowl champion New York Giants come to Charlotte.

The Panthers would have faced difficult odds in reaching the postseason had they lost. Since 1990, teams starting the season 0-2 missed the playoffs 88 percent of the time.

“I said to the guys before the game that this was a must win, and it really was,” offensive tackle Jordan Gross said. “We couldn’t go 0-2 to start this season off and lose at home, and lose to the Saints again. Their team has been successful the past few seasons. To set a new standard around here we had to beat them.”

A week after tying a franchise low with 10 rushing yards in a 16-10 loss to Tampa Bay, the Panthers sliced up the Saints for 219 rushing yards, many coming when Carolina ran its zone read.

Newton, who rushed for 71 yards and a touchdown on 13 carries, found running room outside when he kept the ball on the option. Running backs DeAngelo Williams and Jonathan Stewart averaged nearly 5 yards a carry.

Newton said the zone read pulled the Saints’ linebackers closer to the line of scrimmage, opening up the Panthers’ play-action passing game. Newton completed 14 of 20 passes for 253 yards and a touchdown, and finished with a quarterback rating of 129.2.

The Redskins ran the zone read in a 40-32 win against New Orleans in Week 1, rolling up 459 total yards behind rookie quarterback Robert Griffin III.

With New Orleans employing a spy against Newton at times, the Panthers finished with 463 yards – the ninth time in 18 games they have surpassed the 400-yard mark under Ron Rivera.

The Panthers’ offense wasn’t much of anything at Tampa Bay, particularly on the ground. Offensive coordinator Rob Chudzinski was criticized for abandoning the rushing attack too early after the Panthers fell behind 13-0 in the first half.

After just 13 running plays against the Bucs, the Panthers had a 2-to-1, run-pass ratio against the Saints, with 41 rushes and 20 passes. Each member of the Panthers’ three-headed backfield scored a touchdown.

“We knew that we had to pick it up. Last week wasn’t good enough,” said fullback Mike Tolbert, who scored his first touchdown as a Panther on a 2-yard run. “Coach knew that we needed the ball a little bit more, and he gave it to us. He gave us our shot, and we made it happen.”

So did the Panthers’ defense.

With half of their defensive starters out, the Panthers were shredded for a franchise-worst 617 yards in a 45-17, Week 17 loss at New Orleans last season. Several Panthers’ players were upset the Saints kept Brees, running back Darren Sproles and tight end Jimmy Graham in through the final quarter to go after individual records.

“We weren’t a very good team Week 17 last year. I don’t really talk about last year very often,” Gross said. “But that being said, I was glad to beat them. The Saints have kind of been at the top for a while. It’s fun to beat those guys.”

Though they allowed 486 yards, the Panthers clamped down when they needed to on Brees, who finished with 325 yards but needed 49 passes to do it. Brees had a rating of 72.2, his longest completion was 29 yards and his first interception changed the complexion of the game.

Brees was 7 for 7 as the Saints drove 80 yards for a touchdown on their opening possession.

But he made an ill-advised throw the next series deep in New Orleans’ territory. Strong safety Charles Godfrey read it perfectly, cut in front of tight end David Thomas and raced 9 yards for a touchdown.

Godfrey’s pick started the Panthers on their way; Beason’s ended the Saints’ comeback hopes. With the Saints at their 29 with 31 seconds left, Beason – playing deep middle – cheated toward Graham’s side and Brees never saw him.

“It’s hard to get an interception on Drew. He’s so good. He’s going to make those unbelievable passes,” Beason said. “To get a chance to even get a hand on the ball is big. So a pick, I just said to myself when I caught it, ‘Finally.’?”

The same could be said after the Panthers ended a four-game skid against New Orleans, the 2009 Super Bowl champ and class of the NFC South in recent years. But with the Saints dealing with the fallout from Bountygate, Panthers veteran receiver Steve Smith suggested there could be a changing of the guard.

“Times change,” Smith said. “We’ve got to play them again, so it makes no sense to act like we’ve just won the world championship or we’re going to the playoffs. It’s one game. One game to learn from. One game to say, ‘Good job.’ But we have to move on and move on really quickly.”