Chiefs looking for answers after another lopsided loss

This news story was published on September 16, 2012.
Advertise on NIT • Subscribe to NIT 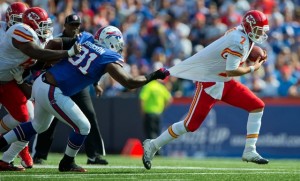 ORCHARD PARK, N.Y. — Hope gave way to despair for the Chiefs after they were again blown out of a game – this time by a struggling opponent, the Buffalo Bills.

Sunday’s 35-17 loss, one that wasn’t even as close as that lopsided score would indicate, sent them down into an 0-2 hole with no escape hatch in sight. That made it difficult for the Chiefs to maintain the brave front they put up after last week’s season-opening loss to Atlanta.

“We have to figure out what’s going on and we have to figure it out quick,” linebacker Derrick Johnson said. “We’re 0-2. There’s a sense of urgency going on right now. It’s just like last year. We’re not playing as well as we need to. Our expectations were high, and we’re not meeting them.

“We’ve got to do something different. I’m not saying it’s our scheme. Maybe it’s just our mind-set. I don’t know what it is.”

The defensive problems spread this week as the Bills rushed for more than 200 yards. The Chiefs had no solution for Buffalo’s quick C.J. Spiller, who had 123 yards and two touchdowns in just 15 carries.

“It’s disappointing because I thought we prepared well during the week,” coach Romeo Crennel said. “We had energy and had the right mind-set coming into the game, and then we got here and we couldn’t do anything right on either side of the ball.

The loss to Buffalo, which gave up 48 points in a lopsided loss of its own against the New York Jets in the season opener, is a sign of a deeper problem for the Chiefs. The Falcons, who scored 40 points against the Chiefs, are capable of running it up against many opponents.

But the Bills were equally as miserable in their opener.

“From what I’ve seen, if we do what we’re supposed to do, then we would be better.”

The Chiefs believed they would get a lift from the return of two of their better defensive players, linebacker Tamba Hali and cornerback Brandon Flowers. Neither player made any difference. The Chiefs had no sacks, and for the second straight week failed to force their opponent to commit a turnover.

“We’ve just got get everybody on the same page and then we can make it work,” Flowers said. “We have the talent. I’m pretty sure we’ll have long meetings (Monday) and Tuesday to get these problems fixed because this can’t keep going on. Our defense prides itself on making plays, and we can’t stand on that right now.”

The Chiefs fell behind 7-0 in the first quarter and eventually by as much as 35-3 before they scored a couple of touchdowns late in the game. They also never led against the Falcons last week, and continuously playing from a deficit is taking a toll on their offense.

The Chiefs searched for a reason for hope from this loss but couldn’t find one. They did manage the two late touchdowns, but only after the Bills had backed off.

They held the Bills to one second-half offensive touchdown, but Buffalo was content in the final quarter to merely play keep-away.

“We did play better in the second half and maybe that’s a good sign,” Johnson said, before reconsidering. “But that’s not enough.”