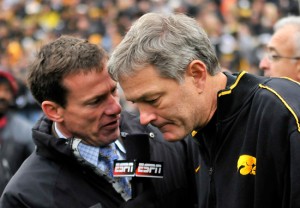 COACH FERENTZ:  Their players are very well coached and they played extremely hard and they have got a good team, so we knew this was going to be a tough ballgame and it was.

We are certainly pleased with the way our guys responded during the course of the game and what they did with their opportunities and certainly played well enough to get the victory.  But it was a hard‑fought game and I’m really proud of our team’s effort and thought they did a good job.  Thought we have improved since last week.

Q.  Can you update us on the status of Garmon and Bullock?

COACH FERENTZ:  They both got injured and were both disqualified for the second half.  We’ll just see where that goes.  That was unfortunate obviously, and then both of them are moving around fine in the locker room, but I don’t know how far away we are there.

And then coincidentally, Mike Malloy turned up sick on Tuesday morning, so we didn’t have him all week.  But Mark Weisman stepped in and did a great job.  That’s part of football unfortunately, but it’s something that you have to have if you’re going to have success and can’t say enough about the job he did being prepared and then also playing really well out there.

Q.  The line from the beginning, just seemed like they owned the line of scrimmage.

COACH FERENTZ:  One encouraging thing today was we have driven the ball in the opening drive both games to start with here but we have come away with field goals and today we finished it off and did it a couple of times and that was encouraging.

From the sideline, it looked like the line was playing well and doing some good things and that’s a positive, because we have got some youth up there, too, but looks like they did a good job and took care of business for the most part.

And you know, we made a step forward, so hopefully that’s in the film tomorrow.

Q.  Mark Weisman, that probably was not expected out of you ‑‑

COACH FERENTZ:  That was not scripted, I can assure you.  We thought he might play a little bit but we did not foresee the circumstances.  But he runs tough.  He’s done a great job.  Louis Trinca‑Pasat was our most improved player back in the spring and I think I mentioned at the end of camp here preseason that Mark Weisman probably could give him a run for the money, too.  He really good a good job.

So, I can’t say enough about him.  And it’s one thing to do it in practice, but to go out and do it in a game in a circumstance where guys are trying to nail you.  He really did a great job and it’s a credit to him.

COACH FERENTZ:  That’s a throwback there.  You’re aging yourself there.  That’s a good one.  But they do.  I think, you know, Damon was running the ball really well before he was hurt, unfortunately.  And Greg stepped in and did a good job, too.

Yeah, I think there’s no question about it, when you have a back who is physical, the linemen feed off that; and Shonn Greene, the guys love blocking for him.  It might give us a little variation to what we are doing.

COACH FERENTZ:  It is.  We were just talking about it, he started out at Air Force, didn’t like having guys bounce quarters off his bed I guess, one of those deals.

I’m not sure of the entire details, but he ended up having an interest in coming here and pretty much since he was ineligible last year, redshirt player and I said to him in the spring, the biggest question was, will this guy block; will he block?  And he answered that question pretty well and he’s obviously done some other things.  But he’s just a hard working guy.

Q.  So he does not have a scholarship ‑‑

COACH FERENTZ:  I told him at the end of camp, we were booked up at 85, and I told him as soon as we had one available, which would be in January ‑‑ just write that down, kind of a Rob Bruggeman story, if you will, from years ago.

Q.  A performance like this, how does this help you with momentum heading into Central Michigan?

COACH FERENTZ:  First thing is we scored some touchdowns. That was really big because we have had a hard time getting the ball in the end zone and that was a real positive and to do it I in the first two drives, that was good.

I really can’t fault the offense.  You think about the first three possessions, we come out with 17 points, we’ll take that any time.  A little lull there in the third quarter but then guys responded.

The other good thing we talked about Mark Weisman but it was good to see Keenan make a really difficult, tough play near our bench on the third down to keep a possession going.  And then Jordan stepped in and got a tough catch, also.  When you see guys do things in a sticky situation, that’s good.  It was good to see him get the ball in his hands and do some things, as well.

Q.  With Garmon and Bullock, did the concussions knock them out, or is that just Bullock?

COACH FERENTZ:  No, it just ‑‑ Bullock, you know, obviously was on the ground there and didn’t play.  But he’s doing fine.  He’s cognizant and everything.  He’s fine.  He’ll go through a procedure there and Garmon is an arm injury.

Q.  Did you offer Weisman to walk on here a couple years ago?

COACH FERENTZ:  We did I guess.  I’m not quite sure how he got here quite frankly.  We don’t get a lot of walk-ons, as you know, from out of state.  Sean Considine would probably be the most famous walk‑on that we have had, Kevin Kasper got to put him in there, too.  I don’t know if there’s a connection there.

But he was on our team last year, ineligible.  I don’t think he was allowed to dress for games because he had transferred.  You know, we were joking about it back in camp, I said, we’ve got to pull a tooth on this guy to find out how many years he has left here.  But pretty sure he’s got a couple.  He’s just a hard‑working guy and he’s quietly going about his business and we really started to notice him in the spring.

Q.  Did he fall into your lap or contact you?

COACH FERENTZ:  I know he ended up having an interest here.  I know one of his former coaches from high school is pretty good friends with Coach Doyle and also Lester.  Connections there, but again, we don’t get a lot of walk‑ons from Illinois, so I can’t tell you the exact details.  I’m just glad he was here.  I was really glad in the spring after seeing him, and really watching him go and more so today, you’re right about that.

Q.  Do you think you got enough of what you wanted out of this game?

COACH FERENTZ:  We got a win.  That was important, most important, and then also I thought our guys really played hard.  And I’ll back it up; they had a good week in practice, and I thought we had a productive week, got some things done.  You know, showed improvement.

So first of all we wanted to win the game.  We knew that was ‑‑ no given there.  And second, we wanted to hopefully show some improvement and we’ve still got a lot of things to work on, I think that’s pretty evident, too.