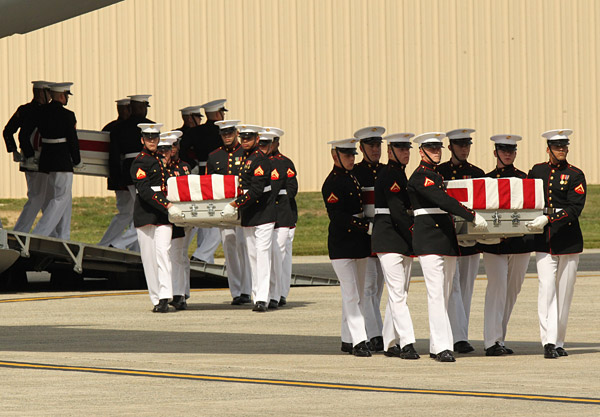 WASHINGTON — Standing next to the caskets of four slain Americans, President Barack Obama pledged the U.S. will honor their sacrifice by standing steadfast in the fight for “dignity and freedom.”

The murders of the American ambassador to Libya and three colleagues at the consulate in Benghazi, Libya, should inspire Americans to not pull back from global responsibilities, he said, but rather to deepen commitment to the principles that make the U.S. exceptional.

“The United States of America will never retreat from the world,” Obama told the friends and families of the four men. “We will never stop working for the dignity and freedom that every person deserves, whatever their creed, whatever their faith. … That’s the spirit that sets us apart from other nations.”

The president delivered the remarks at a solemn ceremony Friday at Andrews Air Force Base, near Washington, marking the return of the men’s remains. Secretary of State Hillary Rodham Clinton and an audience of diplomats filled a hangar on the base to witness uniformed Marines as they carried four caskets from a military transport plane to four waiting hearses.

Moments before Obama spoke, Clinton issued a warning to leaders in the region who fail to protect American missions in their countries.

“Reasonable people and responsible leaders in these countries need to do everything they can to restore security and hold accountable those behind these violent acts,” Clinton said, slowing her speech in emphasis of the phrase.

Ambassador J. Christopher Stevens and the others had put themselves in harm’s way to help the people of Libya build a better country, she said. Sparked at least in part by anger over a video disparaging Islam, protesters have targeted U.S. missions and diplomats who are trying to help their host nations, she added.

“We’ve seen rage and violence directed at American embassies over an awful Internet video that we had nothing to do with,” Clinton said. “It is hard for the American people to make sense of that, because it is senseless. And it is totally unacceptable.”

Many American lawmakers have expressed anger about the protests and the tepid response from some Middle Eastern leaders. Obama publicly questioned the “ally” status of Egypt on Thursday after its president waited 24 hours to publicly condemn the storming of the U.S. Embassy in Cairo. Some U.S. lawmakers have talked about putting a hold on U.S. aid to Egypt and other countries in the region.

Classified briefings that have suggested the attack in Benghazi was planned in advance have heightened the anger among U.S. officials. Republican presidential nominee Mitt Romney said Friday at a fundraising breakfast in New York that Egypt must make certain that foreign diplomats are secure or risk losing the $1.3 billion it receives in aid from the U.S. every year.

But the political debate on Friday took at least a brief pause for a solemn ceremony of remembrance. Three days after the deadly attacks, the men’s caskets arrived at the base shortly after 2 p.m. and were greeted by a Marine carry team that walked them to the hangar. Obama and Clinton stood in front of the caskets and briefly recalled the lives of the four men.

Tyrone Woods, a former SEAL, protected American diplomatic personnel in dangerous posts from Central America to the Middle East, Clinton said. He was a registered nurse and paramedic who had served in Iraq and Afghanistan.

Glen Doherty was a former Navy SEAL and a paramedic who had served in Iraq and Afghanistan. He died while tending to others injured in the attacks. Sean Smith was a computer expert and avid gamer who served in the Air Force before joining the State Department.

Ambassador Stevens first went to the Middle East as a young man in the Peace Corps. He was in Libya during that country’s revolution last year and stayed to help the young government in its formation.

In the days since his death, Clinton said, there has been an outpouring of love and respect for Stevens from Libyans. She told of one Libyan woman who stood silently on a street corner holding a sign that read, “Thugs and killers don’t represent Benghazi or Islam.”

The public servants who risk their lives in foreign countries “are at the heart of what makes America great and good,” Clinton told an audience that included many State Department employees. “So we will wipe away our tears, stiffen our spines and face the future undaunted.”

When the ceremony concluded, the Marines placed the flag-draped caskets into their hearses, waiting to deliver them to Dover Air Force base and to their families.