Cutler and Bears struggle again in loss to Packers 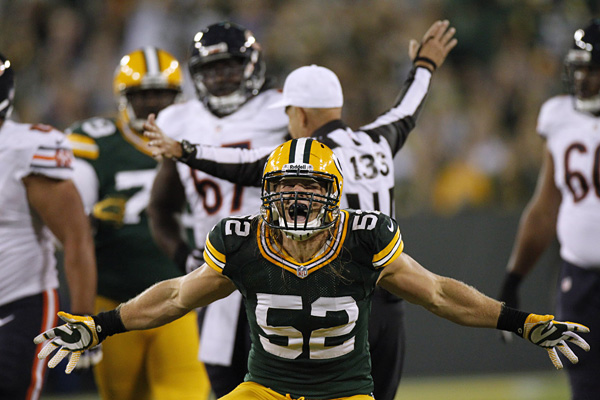 That’s maybe the only way progress can be judged for the Bears, who were looking to make a major jump in class Thursday night against the rival Packers at Lambeau Field. But the frustration level had to reach a familiar level. The NFL hyped the matchup of Cutler and his Packers counterpart Aaron Rodgers, but he was dreadful against Green Bay again.

With an upgraded offense that was supposed to be ready to match firepower with the Packers, the Bears fired only blanks. Matters were made worse in the third quarter when running back Matt Forte was lost to a right ankle injury. But by that time, the Packers were well on their way to a 23-10 victory.

The Packers (1-1) continued their recent domination in the series, winning for the seventh time in the last eight meetings and for the fifth consecutive time on home turf. It will only add to questions for Cutler, who didn’t take kindly to inquiries during the week about why he struggles against the Packers. The quarterback showed disgust with teammates, but it wasn’t like the NBC game vs. the Vikings last season in which a camera and microphone caught him sending a profane message to former coordinator Mike Martz.

Asked afterward if he lost his composure in this game, Cutler replied, “No.”

It was an opportunity for the Bears (1-1) to show off their upgraded offense and see how far they’ve come in the quest to close the talent gap in the division. President Ted Phillips cited the Packers and Lions 8 ½ months ago when he changed the complexion of the franchise and paired general manager Phil Emery with Lovie Smith — for at least one season.

One evaluation is simple: Cutler is not in a class with Rodgers. He was intercepted four times, twice by Tramon Williams, and completed 11 of 27 passes for 126 yards. A 21-yard touchdown pass to tight end Kellen Davis with 6 minutes, 49 seconds to play was set up by a Tim Jennings interception. Cutler was sacked seven times, 3 ½ by Clay Matthews, and his passer rating was an anemic 28.2. The offensive line, without the seven-step drops, was overrun.

“We didn’t have good enough protection, probably made a couple of bad decisions, receivers didn’t get open as much as we needed to,” coach Lovie Smith said. “We didn’t get the running game going to help the passing game. All of those things didn’t work.”

Rodgers completed 22 of 32 passes for 219 yards and threw a 26-yard touchdown to Donald Driver in the fourth quarter.

Cutler now has a 58.9 passer rating in eight meetings, including last season’s NFC championship game. He has thrown eight touchdowns and 16 interceptions.

“Jay is a guy, he’ll give you a chance,” said Packers safety Charles Woodson, who had one interception. “You just have to be in position.”

Cutler challenged the Packers to play press man on Tuesday. Instead, the Packers were in a two-man look, meaning they played man coverage underneath with safeties over the top.

“I don’t know if we took it personal,” Woodson said. “But we thought it was kind of funny, that all of a sudden they were the team to beat because they got a couple of new guys. They had no answers up front.”

Wide receiver Brandon Marshall went from passing game savior to invisible. Wide open in the end zone in the third quarter, a pass went off his hands. Largely with the help of dump-off passes from Cutler to Forte, the Bears drove deep into Packers territory before the drop forced them to settle for a 45-yard Robbie Gould field goal. Marshall made only two catches for 24 yards and Alshon Jeffery had just one for 7.

Cutler wasn’t the only quarterback victimized by his receivers. Had Rodgers’ targets not let him down, the score would have been more lopsided.

The Packers led 13-0 at halftime, thanks in large part to a perfectly executed fake field goal. Lining up for a 45-yard attempt by Mason Crosby, holder Tom Masthay flipped the ball to tight end Tom Crabtree, who went through a wide hole on the right side and had a clear path to the end zone as two linemen wiped out safety Chris Conte. It was a big gamble because the Packers faced fourth-and-26. But Crabtree rumbled 27 yards to the end zone in a rare breakdown by Bears special teams.