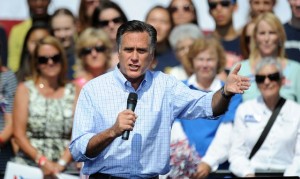 FAIRFAX, Va. — Mitt Romney dialed back his sharp criticism of President Barack Obama’s handling of the crisis in the Middle East on Thursday, even as he widened his attack on Obama’s stewardship of foreign policy.

Appearing at a campaign event in a key swing state, Romney sought to turn the focus back on the economy, broadening his criticism of Obama’s record to suggest a country adrift, saying that “as we watch the world today it seems we’re at the mercy of events instead of shaping events.”

His remarks were in contrast to his rapid-fire attack on the administration’s handling of violent incidents at U.S. diplomatic posts in Egypt and Libya this week, which drew criticism even from members of his own party. Romney didn’t refer directly to Obama on Thursday as he mentioned the deaths of four Americans in Libya and pledged a “strong America.”

Few Republicans had embraced Romney’s criticism of the White House’s response to a violent protest at the U.S. Embassy in Cairo and what was believed at first to be a protest at the U.S. consulate in Benghazi, Libya — it turned out to be an attack — and fact checkers found fault with his assertions. He had seized on a statement issued by the U.S. Embassy in Cairo hours before the demonstration to lambaste Obama, who already had distanced the administration from the embassy statement.

The Romney campaign issued a press release suggesting that the administration sided with the attackers before it was known that the U.S. ambassador to Libya was among the dead. Critics on both sides of the aisle said the comment was ill advised, calling it an attempt to score political points at a moment that required national unity.

But if many Republicans weren’t with Romney on Wednesday, they were on Thursday, when they seemed to share in the GOP nominee’s broader critique of the president’s foreign policy. Sen. John McCain, R-Ariz., reiterated his complaint about the administration’s “feckless foreign policy.”

Campaigning in Golden, Colo., Obama said he had delivered on promises to end the war in Iraq and wind down the war in Afghanistan.

But the turmoil in the Middle East and footage of violent protests at U.S. embassies complicates his message, and Obama vowed to bring justice to those who contributed to the deaths of the four Americans.

“We see on our televisions that there are still threats in the world, and we’ve got to remain vigilant,” Obama said. “That’s why we have to be relentless in pursuing those who attacked us this week.”

Political strategists suggest few voters cite foreign affairs as a motivating issue, and Romney sought to tie his remarks to the economy, where polls suggest Obama is weakest. His campaign released a new ad Thursday criticizing Obama’s record on manufacturing, asserting that hundreds of thousands of manufacturing jobs have been lost during his administration.

The Obama campaign accused the Republicans of playing with the facts. It said the ad refers to job losses that occurred in the first months after Obama took office, and that manufacturers have added half a million jobs since January 2010.

At his Virginia event, Romney’s warm-up speakers directed their remarks to jobs, small business and women, while Romney laced into Obama’s economic record.

“We’ve watched him for the last four years, and what he has done has not helped,” Romney said. “I looked at the text of his speech at the convention. I expected that there would be new ideas in there. There are no new ideas. He’s out of ideas, he’s out of excuses, and we’re going to make sure in November that you’re going to put him out of office.”