Protesters descend on US embassies in Yemen, Egypt 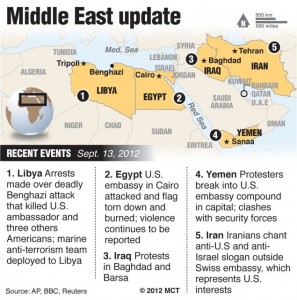 Map of the Mideast region highlighting areas of unrest during the past news cycle.

CAIRO — Young demonstrators in Cairo and Sana, Yemen, battled government security forces Thursday in anti-American protests over an online video made in the United States that mocks the Muslim prophet Muhammad.

In Yemen’s capital, at least four protesters were killed and more than 30 were injured, some of them severely, on the third consecutive day of protests across the Middle East.

Crowds broke into the U.S. Embassy compound in Sana, burning cars and looting offices before they were subdued by the Yemeni army. There were no reports of American injuries, unlike in Benghazi, Libya, on Tuesday night, where gunmen, in the midst of a street protest, stormed the U.S. Consulate and killed Ambassador J. Christopher Stevens and three other Americans.

In Cairo, where the first anti-video protest erupted Tuesday, hordes of young men on Thursday, seeking to reach the U.S. Embassy, tossed rocks and Molotov cocktails at police, who fired back with tear gas. The cat-and-mouse game continued for hours, with the demonstrators unable to get to the embassy.

A constant from the first demonstration has been the large numbers of unemployed young men in attendance. From the fall of Egypt’s Hosni Mubarak in February 2011 to popular protests that helped end the reign of Yemeni President Ali Abdullah Saleh, young men, frustrated by a lack of jobs or freedoms, have served as the shock troops of the region’s so-called Arab Spring” uprisings.

Despite wholesale political change in several countries, many have found they still face similar problems and uncertainties as in the past. The anti-video protests have provided a fresh opportunity to return to the streets and express their rage and frustration. Often the demonstrators appear blind to the possibility that their presence is a tool to be used by political factions in the competition for power in countries suddenly without the leaders who ruled for decades.

In Sana on Thursday, teenage boys and young men thronged the streets around the U.S. Embassy engaged in the bloody protest.

At first, they overwhelmed the smaller number of security officers and entered the embassy gates, where they threw stones at the building and burned tires and two cars. They also smashed security office windows outside the embassy walls.

Later, government forces reached the area and fired shots and tear gas grenades in the air to disperse the crowd.

Yemeni President Abdu Rabu Mansour Hadi apologized to President Barack Obama and formed a committee to investigate the incident. He said groups had taken advantage of the furor over the video to create tension between Yemen and the United States.

Supporters of Yemen’s main Islamist opposition party, Islah, callled for a day of protest Friday after noon prayers, calling it “the Friday of Defending the Prophet Muhammad.”

In Cairo, young men charged the security forces guarding the U.S. Embassy. But unlike earlier in the week, fewer Islamists were among the protesters. Instead, the demonstrators were primarily street youths and so-called soccer hooligans who have become a reliable staple of street demonstrations that have marked Egypt’s transition since February 2011 from military rule to an elected civilian authority.