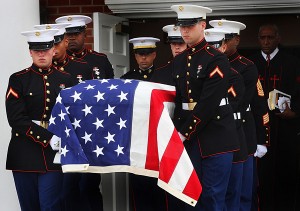 ASMAR, Afghanistan — Crouched in a trench as the torrents of enemy fire briefly ebbed, the Afghan officer and his American mentor took stock: Their ammunition was low, their calls for air and artillery support had been denied and the Taliban were closing in. Now was a good time to withdraw, they decided.

“Lt. Johnson told me that my guys should go first … and he’d follow,” recalled Afghan Army Capt. Ruhollah Ayar. “I told him that if we all stand and push back, the enemy will fire at us. He told me, ‘Go first and we will follow.’”

Ayar reluctantly agreed. Then he and his men bolted, scattering down the terraced fields of the Ganjgal Valley. Marine 1st Lt. Michael Johnson, two other Marines and a Navy corpsman stayed behind, blasting covering fire for the retreating Afghans from the trench in which they would shortly die.

Johnson and his team members each received Bronze Stars posthumously for their actions in battle, but the details of what took place before the four died had been undisclosed until Ayar spoke this spring to a McClatchy Newspapers reporter about the events of Sept. 8, 2009, when the Taliban ambushed a joint American-Afghan patrol in the Ganjgal Valley. The resulting battle gave rise to the first Medal of Honor granted to a living Marine since the Vietnam War, an award whose official accounts have since been questioned by McClatchy because of conflicting testimony over whether Marine Sgt. Dakota Meyer had performed some of the deeds attributed to him.

Pentagon investigators didn’t talk to Ayar or the other Afghans who took part in the battle. If they had, they would have heard a heroic tale of the four Americans trying to hold back encroaching insurgents as the Afghan troops scrambled to safety down the furrowed, rock-strewn terraces. One of the feats for which Meyer was awarded the Medal of Honor was recovering the bodies of the four Americans. Former Army Capt. William Swenson also was nominated for the medal, which President Barack Obama has yet to approve, in part for helping to recover the bodies.

“Everyone was taking care of himself,” recalled Pvt. Nematullah, 30, of Farkhar, in northern Takhar province, who survived three bullets in the abdomen in the battle. “Every one of us was trying to find cover somewhere to protect ourselves.”

Johnson, 25, of Virginia Beach, Va., Staff Sgt. Aaron Kenefick, 30, of Roswell, Ga., Gunnery Sgt. Edwin W. Johnson, 31, of Columbus, Ga., and Navy Hospitalman 3rd Class James Layton, 22, of Riverbank, Calif., were members of the Marine unit that was training the Afghan National Army’s 1st Kandak, 2nd Infantry Brigade, 201st Corps. Their mission was to accompany Ayar’s men through the mountainside hamlet of Ganjgal to a position on a slope at the end of the U-shaped valley. From there, they were to provide security as other Afghan troops searched the compounds of rock and dried mud, and held a prearranged meeting with tribal elders to discuss aid projects.

But as Ayar, his men and their U.S. mentors reached the first house by the track that winds through the village, some 50 to 60 insurgents hiding inside homes and on the overlooking slopes opened fire. It was 5:30 a.m. and the middle of Ramadan, the Muslim month of prayer and fasting.

Nematullah and another Afghan, Sgt. Ataullah — both use only one name, like many Afghans — said in separate interviews that they were with Kenefick and Layton at the head of the column when the gunfire broke out. The four hit the ground near the first house.

“We could not see the enemy, but the enemy could see very clearly that we were lying on the ground,” said Ataullah, 29, who is from northern Takhar province. He turned to Kenefick and Layton to consult in broken English and hand gestures. “I told them that we should push back. They said to me that helicopters would come and drop smoke and then we’d push back.”

Ayar, nine of his men and the Johnsons were firing from a terrace below the front of the house. Listening to Michael Johnson’s radio calls for support, Ayar wondered how much longer it would take the nearby U.S. Army base to order in the helicopters and artillery fire that were promised earlier.

“I told him that we should receive artillery support so we can get out of this open area, to get out of the battle zone. He told me, ‘F—ing Army.’” Two Army officers would be reprimanded later for failing to provide the support.

Ayar repeated that they should pull back. “‘No, we won’t push back. … We’re not authorized to push back,’” Ayar quoted the Marine as saying. “But after 10 minutes, he said, ‘You’re right, we’re moving back.’”

Ayar spied an abandoned light machine gun and went to pick it up, as a bullet had damaged his own weapon. But a hammerlike blow just above his left hip drove him to the ground.

“When the bullet hit me … it made a shocking noise. I thought I had lost my leg,” he said. “By Allah’s grace, it didn’t hit a bone. Lt. Johnson saw me get shot. He was watching me.”

That was the last time Ayar saw Johnson. But he continued to hear Johnson and his team as they struggled to keep at bay the men bent on killing them.

“They were firing at the Taliban,” Ayar said. “I heard them firing for one or two minutes. I didn’t hear them firing after that.”