11 years later, a nation pauses to reflect and mourn anew 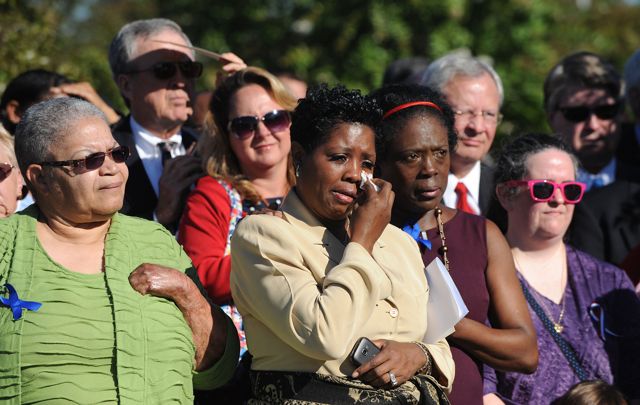 NEW YORK — With bagpipes and somber bells sounding a sharp counterpoint to the commemorative moments of silence, the nation on Tuesday marked the 11th anniversary of the terrorist attack that brought down the World Trade Center in Manhattan and shattered the country’s political psyche.

At ceremonies in New York and Pennsylvania and at the Pentagon, relatives and friends mourned the victims of the Sept. 11, 2001, attack by Islamic terrorists. The scenes were as moving as those from previous ceremonies, though they also seemed more personal than in the past, especially compared to last year’s 10th anniversary. Unlike past events, authorities did not raise any special security alerts this year.

The sun rose on a cool, crisp morning, remarkably similar to that which dawned 11 years ago. At all three sites — the National September 11 Memorial & Museum in Manhattan, the Pentagon, and a field in Shanksville, Pa. — the focus was on the victims who died when terrorists hijacked four commercial jetliners. The Manhattan ceremony also honored the six people killed on Feb. 26, 1993, when attackers set off a truck bomb beneath the North Tower of the World Trade Center.

A total of 2,983 people died in the 1993 and the 2001 attacks, the latter of which brought down both World Trade Center towers.

As in past years, the day in New York began with a bagpipe procession, followed by an honor guard and the reading of all the victims’ names in alphabetical order by relatives, who often added personal messages to their recitations. “Your family and friends miss you. We will never forget, Johnny,” Martin Collins said to his brother, New York firefighter John Michael Collins.

Now, the footprint of each tower is filled with a giant reflecting pool, and the names of victims are etched into bronze parapets, allowing visitors to run their hands over the names as they peer into the watery voids.

There were no political speeches in New York, and this year’s presidential campaigns were briefly paused. Both campaigns pulled some negative ads in a bow to the somber ceremonies.

But both candidates were highly visible. President Barack Obama and his wife, Michelle, observed a moment of silence on the White House lawn at 8:46 a.m. Eastern, the moment the first hijacked plane crashed into the World Trade Center. The Obamas then went to the Pentagon, one of the other targets of the al-Qaida attack.

There, the president — aided by a Marine honor guard — placed a white floral wreath on a metal stand above a concrete slab that read “Sept. 11, 2001 — 9:37 am.” A moment of silence began at precisely 9:37 a.m., when United Flight 77 hit the west side of the Pentagon 11 years ago. One hundred and eight-four people died that day.

Both Obama and Defense Secretary Leon Panetta stressed that the United States is stronger today because of how it has fought back against terrorists around the world, including in Yemen and north Africa. It was on Obama’s watch that U.S. forces killed Osama bin Laden in Pakistan, a point frequently made by Democrats during the current presidential campaign.

Obama said the United States is safe and its people more resilient than on the day of the attacks.

Obama then went to Arlington National Cemetery in Virginia, just outside Washington, D.C.

Romney was at Chicago’s O’Hare Airport, where about two dozen firefighters gathered on the tarmac for a brief memorial timed to the moment the first plane struck the World Trade Center. Standing on and in front of several fire trucks, lights flashing, the firefighters stood at attention, saluting, for a full minute at 7:46 a.m. Central time. A large American flag was draped on the trucks behind them.

Romney arrived at the airport for a campaign flight about 15 minutes later. Before boarding his plane, he strode about 100 yards across the tarmac to where the firefighters were still gathered in a row and shook hands with each of them.

“On this most somber day, those who would attack us should know that we are united, one nation under God, in our determination to stop them and to stand tall for peace and freedom at home and across the world,” Romney said in a written statement distributed by the campaign.

The day’s events came a day after two bittersweet victories for those most affected by the Sept. 11 attacks:

In Washington, health officials formally added dozens of cancers to the list of illnesses that could be covered by a fund to help emergency workers and others who say they were affected by toxic chemicals rising from the ruins in lower Manhattan.

And in New York, the mayor and governor late Monday said an agreement had been reached to re-start construction of a museum at the World Trade Center site. Work had been stalled amid a dispute over finances and operation issues.

The fast-rising skyscrapers around the plaza and the transit hub under construction below the ground are considered signs of lower Manhattan’s resurgence since the attacks, which left the area coated in dust and largely abandoned by residents and businesses.

Now, the memorial is one of the city’s most popular tourist sites, with 4.5 million visitors in its first year of operation. The office and commercial buildings that eventually will ring it are dominated by One World Trade Center, which is due for completion in 2014 and will rise 1,776 feet into the sky.

As this anniversary neared, though, it was marred by the failure of officials of New York and New Jersey, who control the site, to usher in completion of the museum that was supposed to have opened Monday.

Construction of the museum, which will share the plaza with the memorial, has been stalled for months because of disputes involving Mayor Michael Bloomberg of New York, Gov. Andrew Cuomo of New York, Gov. Chris Christie of New Jersey and the Port Authority of New York and New Jersey.

On Monday evening, Bloomberg, Cuomo and Christie announced they had come up with an agreement on financial and operating issues that would allow building to resume. Cuomo called the deal “a milestone” and said it ensures that no additional public funds will be used on the project.

The president of the 9/11 Memorial, Joe Daniels, said before Tuesday’s ceremony that, with the deal, he envisioned that construction would resume by the end of the month.

“Most importantly, it will tell the story of those who died that day,” Daniels told the local Fox TV station’s “Good Day New York” show.

Among artifacts to be exhibited at the museum will be the gold watch worn by Todd M. Beamer, who was one of the leaders of the passengers’ attack on hijackers of Flight 93. The United Airlines jet crashed into a field near Shanksville, Pa. Daniels said the date and time on the watch, recovered at the crash site, remain stuck at Sept. 11, 2001 and at the time of impact: 10:03 a.m.

Earlier Monday, Dr. John Howard, director of the National Institute for Occupational Safety and Health, formalized the addition of more than 50 cancers to the list of illnesses covered by the law passed to help emergency workers and others who became ill after recovering efforts in lower Manhattan. The act is named for James Zadroga, a retired New York police officer who died in 2006 of respiratory ailments that his family blamed on inhalation of toxic chemicals during his work at the World Trade Center site.

Under the federal Zadroga Act, more than $4 billion was set aside to help people affected by illnesses blamed on the attacks. The addition of cancers to the list of covered ailments was long sought by families, but it also raises concerns that the anticipated flood of claims will leave the fund short of money to cover everyone.