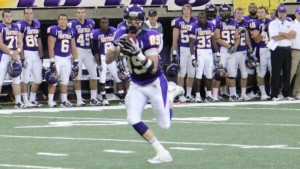 CEDAR FALLS, Iowa  – The No. 7 University of Northern Iowa football team defeated the Central State Marauders Saturday night 59-0 inside the UNI-Dome, giving head coach Mark Farley his 100th win and improving their record to a 1-1 mark on the season.

The Panthers finished the game with 471 total yards, including 311 through the air and 160 on the ground. Redshirt freshman Austin Ebertowski led the team in rushing with 92 yards and three touchdowns. Brett LeMaster led the team in receiving with four receptions for 125 yards and one touchdown.

After the Marauders opened the first quarter with a recovered onside kick, the Panther defense went to work on the Central State offense to force them to a quick three-and-out on their first drive.

The Panthers opened their first offensive series of the game with several explosive plays including a 65-yard pass from redshirt freshman Sawyer Kollmorgen to LeMaster to put UNI on top for good with the lead at 7-0. Tyler Sievertsen added three points to the Panther lead with his first field goal of the season, knocking a 42-yarder through the posts.

Kollmorgen threw his second touchdown pass of the game late in the first quarter to junior Phil Wright. The seven-yard pass capped the seven-play drive, taking 1:50 off the clock.

Wilmot Wellington notched UNI’s first interception of the season late in the quarter to give the Panthers the ball back.

The UNI defense matched Kollmorgen’s second touchdown pass with an interception for a touchdown with just 31 seconds left in the first quarter. Zach Cutkomp grabbed the second interception of the game and returned it 16 yards for the score to give the Panthers a 24-0 lead at the end of the first.

The Panthers tacked on another seven points with 4:46 left on the clock to give UNI a 31-0 advantage. Kollmorgen hooked up with Chad Owens for Owens’s second touchdown of the season on an 11-yard scoring reception.

Mac O’Brien gave the Panthers their third interception of the game late in the half when a Marauder pass was deflected. O’Brien returned the ball four yards, setting up a one-yard rushing touchdown by Ebertowski to give the Panthers a 38-0 lead heading into halftime.

Kollmorgen finished the first half going 11-18 for 229 yards and three touchdowns. LeMaster finished with a staggering 125 yards and one touchdown while Carlos Anderson broke the 2,000 career-rushing yard mark with his 68 yards.

Dan Edem notched the fourth interception of the game for a 19-yard return to open the second half. The turnover set up Ebertowski’s second score of the game, this time a one-yard rushing touchdown, to give UNI a 45-0 lead early in the third quarter.

Redshirt sophomore Jared Lanpher took ahold of the reins of the Panther offense in the third quarter, connecting with Sam Rohr for a 41-yard pass late in the stanza. The pass set up the third rushing touchdown for Ebertowski, who gained four yards for the score.

The Marauders fumbled on the ensuing kick-off return with Jalen Barnes recovering the fumble for another Panther touchdown giving UNI a 59-0 lead with 2:12 left in the third quarter. The last time a Panther returned a fumble for a touchdown was last season against Wofford.

To start the fourth quarter, the Panthers grabbed another fumble after J.J. Swain forced the ball out of a Marauder running back’s arms for the second fumble of the game.

The Panther defense finished with 60 tackles against the Marauders with Shawn Rush leading the way with seven. The UNI defense grabbed four interceptions, forced one fumble and a touchdown. The defense accumulated 10 tackles for loss of 37 yards and one sack for a loss of seven yards.

The UNI Panthers return to action Sat. Sept. 15 when they take on in-state foe Iowa. The game is set to kick-off at 2:30 p.m. and will air on the Big Ten Network.