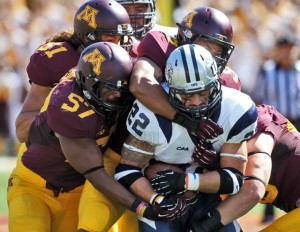 MINNEAPOLIS — MarQueis Gray strides into the huddle with an all-business air, looks his teammates in the eye, and utters with palpable gravity: “Oprah Winfrey? Or Rosie O’Donnell?”

And that’s when you know.

“I saw the goofy MarQueis out there today,” tailback Donnell Kirkwood said after Gray accounted for four touchdowns Saturday and directed a 44-7 Minnesota victory over New Hampshire at TCF Bank Stadium. “It was the playful MarQueis, the having-fun-on-the-field MarQueis. He’s good when he’s goofy.”

And not as good when he’s jittery, which was the case in Las Vegas a week ago. The senior quarterback was calm and capable this time, directing an offense that hadn’t scored so many points in regulation since a 63-26 rout of Indiana in 2006. Gray romped 75 yards for one touchdown, outracing three defensive backs to the end zone, and powered his way 11 yards for another score.

And though the Minnesota Gophers’ low-to-the-ground game plan required him to throw only eight passes, he completed six, two of them for touchdowns.

“The goofy MarQueis came out and played football like he knows how to do,” Kirkwood said.

So did the Gophers, who got off to their first 2-0 start since 2009 by finally living up to the “Big Ten” patch on their uniforms. Big Ten teams are supposed to rout FCS teams, but not since 2002, and a 42-0 thrashing of Southwest Texas State, had the Gophers enjoyed such a romp over a lower-division opponent.

That the Wildcats turned out to be a pretty good team with Division I-caliber players made the victory even more rewarding. It might not have been easy at all if not for a defensive line that stuffed the run, collapsed the pocket and knocked New Hampshire quarterback Sean Goodrich out only three plays into the Wildcats’ first drive with an unspecified injury. Backup Andy Vailas threw for 158 yards but took four sacks and threw a damaging interception.

“When you put pressure on a quarterback, that really disrupts the timing of an offense and makes him throw before he wants to,” said linebacker Mike Rallis, who directed the defense while wearing late teammate Gary Tinsley’s No. 51. “It’s fun to watch.”

Speaking of which, a larger-than-expected crowd of Gophers fans seemed to agree. The announced attendance for the Gophers’ home opener was 47,022, and while that likely overstated the actual turnstile count by a few thousand fans, the team noticed how loud and animated the stands seemed.

“We probably got three or four third-down stops because of our fans,” said coach Jerry Kill, and if home-field advantage gets a little boost from a pint or two of beer — sales of which were allowed at TCF Bank Stadium for the first time on Saturday — all the better.

The biggest smile, though, belonged to Gray. After spending a week explaining why the confident, competent passer the Gophers saw in training camp seemed absent in Las Vegas, the senior quarterback clearly enjoyed making such a quick, and convincing, rebuttal.

“I was down after that game, but we won the game, that’s all the matters,” Gray said. “I felt bad heading into our weekly meetings because I knew I was going to get shredded. But once we started preparing for New Hampshire, that went out the window and I started focusing on this game.”

It showed. Minnesota scored touchdowns on four of its first seven possessions, converted 11 of its 17 third downs, and with the help of a safety when New Hampshire’s punter fumbled a snap and threw the loose ball out of the end done, reached 30 points before halftime for the first time since the 2006 Insight Bowl.

Gray was the biggest reason for all that offense: He hit a wide-open receiver Isaac Fruechte with a soft rainbow of a pass on his inside shoulder for a 27-yard score. He romped straight up the middle, untouched, for 75 yards for an electrifying touchdown, the longest of his career.

Yes, he still must eliminate the two sacks and three fumbled snaps (he recovered all three), but the lasting image of the Gophers’ victory in their home opener — first time that’s happened since 2009, too — will be that one-man, one-play TD drive in the first quarter.

Well, to everyone but his coaches.

A suggestion: Start with a “Goofy” cartoon.