Lynx returned to their roots 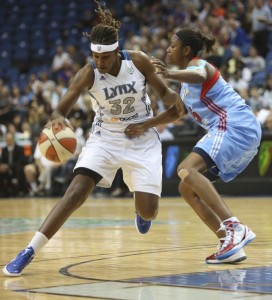 Rebekkah Brunson, left, of the Minnesota Lynx drives to the basket against the Atlanta Dream’s Tiffany Hayes during the first quarter at the Target Center in Minneapolis, Minnesota, Friday September 7, 2012.

MINNEAPOLIS — When all else failed in stunning fashion, Taj McWilliams-Franklin suggested it was time the Lynx go back to their roots.

Down 25 during an ugly first half that left the Lynx glaring at the officials and all but broken by a relentless Atlanta team, Minnesota stayed four games up in the WNBA’s Western Conference by leaving everything it had on the court in a gutty 97-93 double-overtime victory Friday night at Target Center.

“It wasn’t even about basketball at that point; it was just about not being embarrassed,” McWilliams-Franklin said of the team’s attitude at halftime. “I told them it’s kind of like street ball. There ain’t no rules, the refs aren’t calling anything … we’ve just got to buck up and play. Be stronger, play harder, go after loose balls and do what the Minnesota Lynx normally do.”

The Lynx players must have ruled on the playgrounds.

They trailed by 21 at halftime but launched a second-half revival to tie a record for the biggest comeback in WNBA history (Detroit also came back from 25, in a game against Los Angeles in 2005), building momentum immediately after the break and taking its first lead since 1-0 on the first play of overtime.

With a minute left in the second overtime, Lindsey Harding hit a three-pointer to tie the score at 93-93. But McWilliams-Franklin — who was stellar in both overtimes with 15 points between the two — hit a long two-point jumper to pull the Lynx (23-4) ahead by two, and Candice Wiggins nailed the victory with a pair of free throws.

double-overtime game?” Lynx coach Cheryl Reeve gushed. “Hits two huge shots. Huge shots. Plays a team-high 44 minutes. … There was a time I wanted to get down on my knees and bow.”

McWilliams-Franklin converted a layup with 30 seconds left in regulation to force overtime, and with three seconds remaining in OT, Lindsay Whalen hit one of two free throws to give the Lynx a two-point pad. But Atlanta star Angel McCoughtry made a driving layup at the buzzer to send the game to double overtime.

It didn’t look like the Lynx would get there.

Atlanta came in full of spark and looked like it would run away, getting a stellar 30-point performance from McCoughtry off the bench and dominating for a first half in which the Dream (15-14) built its 25-point lead, cutting and driving past the stunned Lynx defense, scoring 42 points in the paint and hijacking the tempo early.

“It was a snowball effect,” Reeve said. “Just when you thought it couldn’t get any worse, it did.”

But the second half was a different story.

Said Lynx forward Maya Moore, who had a team-high 23 points: “We never panic.”

After crawling back into striking distance in the third quarter on the back of Rebekkah Brunson, who had a career-high 10 offensive rebounds (she had 18 overall, to go along with 15 points), the Lynx caught fire in the fourth, getting the 9,308 fans to their feet.

Seimone Augustus — who left at the end of regulation because of an injured right ankle — started the barrage with a 16-foot jumper and capped a 9-4 Lynx run with a long three-point shot that brought the Lynx within one and had the building rocking.

“One thing led to another,” McWilliams-Franklin said. “We really just put it all together at the right time.”