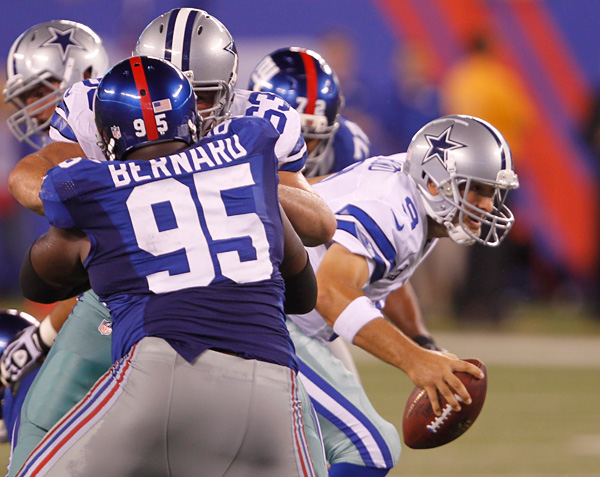 EAST RUTHERFORD, N.J. — If the Dallas Cowboys are indeed America’s Team, Wednesday night was sort of like their national convention. Lots of jumping around, back-slapping, and reveling in promises kept.

And the New York Giants?

They just kept dropping the balloons.

The normally sure-handed Victor Cruz, for instance, saw the football slide through his hands three times on a night the defending Super Bowl champions would love to forget. The Cowboys sacked Eli Manning three times in the 24-17 victory and — to the dismay of the packed house at MetLife Stadium — never allowed the Giants’ offense to get in a groove.

With three touchdown passes by Tony Romo — two to the virtually unknown Kevin Ogletree — the Cowboys unburdened themselves of a weighty millstone. They had lost five of six to New York, including a pair of losses to the Giants over a three-week span at the end of last season.

“We all knew we were the underdogs,” said Cowboys owner Jerry Jones, holding two towels to swab his face in the steaming heat of the visitors’ locker room. “We certainly weren’t proud of the last time we were up here seven months ago. I felt like I never left the halls of this stadium. It’s really special to get this win. They’ve earned it.”

The Cowboys even carved themselves a spot in history. Since 2004, when the league began the tradition of the previous season’s champs playing host to the Kickoff Opener, the defending Super Bowl winners had always emerged victorious. Until this time.

“We certainly are capable of playing a lot better,” said a flushed Giants coach Tom Coughlin, whose team was a three-point favorite.

The NFL moved the game to Wednesday night as not to conflict with the Democratic National Convention’s closing night Thursday. The game was also noteworthy because it was the first regular-season contest since 2001 in which replacement officials were used. The regulars have been locked out in a labor dispute since June.

There were no major gaffes by the replacements but too many by the Giants. Manning was sacked three times and limited to 213 yards passing with one touchdown. The Giants fizzled on two-thirds of their attempts on third down, and they failed to capitalize on a first-and-goal at the one, moving backward on the next three downs then kicking a field goal. It might have been even uglier had Jay Ratliff, star nose tackle for the Cowboys, not missed the game with a high ankle sprain.

Another Cowboys fixture who was not expected to play but did was Pro Bowl tight end Jason Witten, who suffered a lacerated spleen in mid-August. He hadn’t practiced leading up to the game, but hours before kickoff he got medical clearance to play. Still, his teammates didn’t know until close to game time whether he would be on the field.

“They didn’t see me at practice all week, so they were a little concerned,” said Witten, who had two catches for 10 yards. “When they saw me putting the uniform on, they were getting excited and high-fiving. That’s what this game’s about. When you talk about opening the season up here against the world champs, you want all hands on deck.”

Emblematic of the determination of the Cowboys, and the frustration of the Giants, was a 48-yard run by Dallas’ DeMarco Murray in the second half. He looked all but tackled by New York’s Mathias Kiwanuka but instead knocked back the Giants linebacker, twisted away from defensive lineman Justin Tuck, then rumbled for a huge gain.

In five of their eight losses in 2011, the Cowboys blew fourth-quarter leads.

The same thing might have happened Wednesday night, but Dallas made the big plays when it had to. None was bigger than Romo hitting Ogletree for a 13-yard gain on third-and-10 with 2 minutes 11 seconds to play. The Cowboys started the play at their 26, and, had they not converted, would have had to punt the ball back to the Giants and protect a one-touchdown lead.

“That was probably my biggest grab of the night,” Ogletree said.

Ogletree, who went undrafted in 2009 and only truly got his break with the Cowboys this summer when he won the third-receiver job, scored the first two touchdowns of his career. He carries two iPhones, and both were overflowing with text messages after the game.

During an interview, he placed his hand over the pocket of his jeans.