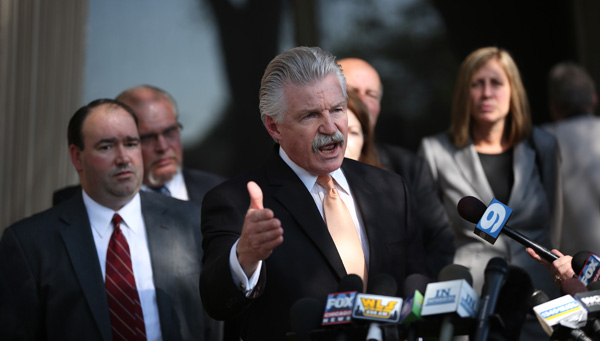 CHICAGO — Moments after a jury found him guilty of drowning his third wife, a stone-faced Drew Peterson was shackled Thursday by deputies while six feet away Kathleen Savio’s family hugged and cried tears of joy.

The circus that surrounded the Peterson case for five years was in full force outside, where the courthouse grounds were awash in emotion and relief. Peterson — portrayed by his own lawyers as a man the public loved to hate because of his clowning, lecherous ways — had been taken down without the benefit of evidence tying him to the crime scene.

On the second day of deliberations, the jury was won over by a case that was largely circumstantial and, one juror said, hinged on the hearsay testimony that originated from Peterson’s missing fourth wife, Stacy.

Will County’s top prosecutor James Glasgow called Peterson, a former Bolingbrook, Ill., police officer, a “coward and a bully” and vowed to “aggressively review” Stacy’s case with an eye toward possibly bringing charges. The fifth anniversary of her disappearance is next month.

“He was a thug,” an emotional Glasgow said of Peterson outside court. “He would threaten people because he had a gun and a badge and nobody ever took him on. Well, we took him on now and he lost.”

Glasgow said the jury’s verdict sent a message that violence against women “won’t be tolerated.”

“This man murdered her because he was larger than she was,” Glasgow said of Savio’s 2004 bathtub drowning.

Prosecutors believed, but were unable to tell jurors, that Peterson rendered Savio, 40, unconscious with a police choke hold, drowned her in the tub and then struck her in the back of the head, possibly with his police baton, to make her death look like an accident.

“I feel like I’m dreaming,” said Savio’s sister Anna Doman outside the courtroom. “After the way we were treated (by authorities) when she died — they treated us like we were either crazy or stupid.”

“We were relieved that after all these years, we finally did it,” Sue Doman said. “We got Drew.”

Peterson, 58, who showed little reaction as the verdict was read but stared intently at jurors as they were polled afterward, said “Good job” to his attorneys before he was shackled and led away by sheriff’s deputies.

He will remain at the Will County jail until after his sentencing, which is scheduled for Nov. 26. Peterson will then be transferred to Stateville prison outside Joliet, said Sheriff Paul Kaupas.

The jury of seven men and five women deliberated about 14 hours before delivering their verdict. A few hours before their verdict came in, they sent a handwritten note to Judge Edward Burmila asking him to define the word “unanimous.”

Glasgow said he feared it meant the jury was unable to reach a decision, which could have resulted in a mistrial and started the process all over. He said he called the Rev. Neil Schori, whose hearsay testimony was a crucial part of the state’s case, and Schori prayed for him. When Glasgow called the Naperville pastor again after the verdict, Schori cried, the state’s attorney said.

“I’m absolutely thrilled with what happened today,” Schori said outside the courthouse. “And I’m so happy for the Savio family and justice is coming for Stacy’s family, too.”

The scene outside the courthouse befitted the tabloid-ready case, which was fed early on by Peterson’s appearances on national TV shows such as “The Today Show.”

News helicopters hovered far above a gathered crowd outside the Joliet courthouse that alternately cheered and jeered prosecutors and defense attorneys. Some carried signs, including one that said, “Common Sense Drew is Guilty!”

A cigar-chomping Cincinnati steakhouse magnate facing misdemeanor charges for threatening Peterson in court shouted profanity as he ran after a vehicle he believed was taking Peterson to jail.

Plainfield, Ill., resident Al Konrath, 59, sang with his wife, Mary, to the tune of “Puff the Magic Dragon” outside court after the verdict was announced: “Drew, the lady killer/no longer has a star/The devil got his day in court/and prison isn’t far.”

Peterson’s defense attorneys said their client was “absolutely fine” after hearing the verdict. Lead attorney Joel Brodsky insisted he wouldn’t change anything about how his team handled the case and seemed to throw up his hands at the state’s hearsay evidence.

“What can you do? It was a stacked deck,” he said. “Hearsay evidence was allowed in, it was an unprecedented amount. It just goes to show when someone is unpopular and going through a divorce … and you have people manufacturing statements … hearsay disguised as evidence — what are you going to do?”

He predicted Peterson would be awarded a new trial on appeal.

“The prosecution never really told us what happened,” said defense attorney Steve Greenberg. “And I’m afraid if someone can be convicted on that kind of evidence.”

A posting on the Facebook page for Peterson’s 19-year-old son Tom, who vouched for his father’s innocence while testifying on his behalf, lashed out at the witnesses. He and his siblings — two of whom are still minors — are now a broken family.

“Who do I have left?” read the statement on Tom’s Facebook page. “Who do my siblings have left? Oh yeah…the pastor, the lawyer, my aunts, and all of my mom’s friends who LISTENED to my mother’s pleas and DIDN’T do anything about it. Now she is dead, and you went forth to break the Constitution to blame my dad. I’m sorry, but that doesn’t seem very believable to me … but since the rest of the world thinks otherwise, this is your fault, you should have come forward earlier.”

A pivotal moment in the trial came when Brodsky called Savio’s divorce attorney Harry Smith in an attempt to impeach a hearsay statement from Stacy that was relayed by Schori.

Schori testified that Stacy told him during a counseling session that Peterson asked her to lie to state police about his murder of Savio. But when Brodsky questioned Smith, he dropped a bombshell for jurors — that Stacy had called him and asked if the fact that Peterson murdered Savio could be used against Peterson in a divorce.

After the verdict, Smith still seemed dumbfounded by Brodsky’s decision to call him as a witness.

His testimony — which Glasgow referred to as a “gift from God” — only bolstered Schori’s hearsay statement and was seen as a key piece of evidence by the holdout juror.

The defense team publicly defended the move Thursday, saying that they actually discredited Stacy by showing she had nefarious reasons for accusing Peterson of murdering Savio.

Smith laughed at the suggestion Thursday, recalling the doomed looks on defense attorney Joseph Lopez’s and Greenberg’s faces as their case appeared to unravel during his testimony.

“It never pays to attack a victim. Jurors never bite,” said Smith, a former DuPage County prosecutor. “It was the strangest moment of the entire strange process.”