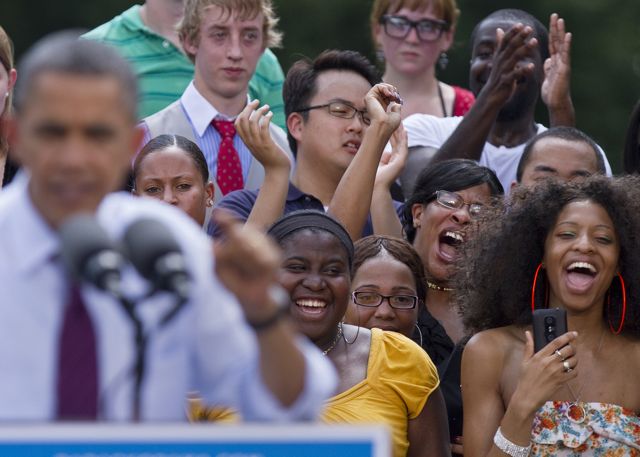 Those rich donors may not expect them to vote for Republican Mitt Romney, Obama said, but it will benefit Romney if the president’s supporters simply decide to sit out the presidential election.

“They figure that if you don’t vote, big oil will write our energy future, insurance companies will write our health care plans, and politicians will dictate what a woman can or can’t do when it comes to her own health,” Obama told an outdoor rally at Norfolk State University, a historically black college. “They’re counting on you just to accept their version of things.”

During day trips this week, Obama has been trying to light a fire under his base as he prepares to accept his party’s nomination on Thursday. The stop in Norfolk was his fourth rally in a week on a college campus.

Romney held only private meetings Tuesday while his running mate, vice presidential nominee Paul Ryan, was confronted in network interviews about statements in his convention speech last week that nonpartisan fact checkers have branded as false or misleading.

The Wisconsin congressman held his ground when challenged to defend statements on Medicare, the federal deficit and the 2008 closing of a GM plant in his hometown, Janesville. Asked by NBC “Today” show anchor Matt Lauer whether he would concede that some of his statements “were not completely accurate,” Ryan responded: “No. Not in the least, actually.”

Factcheck.org, a project of the Annenberg Public Policy Center, found that Ryan’s nomination acceptance speech last week in Tampa, Fla., “contained several false claims and misleading statements.” Politifact, a project of the Tampa Bay Times and other news organizations, faulted the speech for falsehoods as well.

In the speech, Ryan said many people liked the sound of Obama’s talk about change during the 2008 campaign — “especially in Janesville, where we were about to lose a major factory.”

“Right there at that plant, candidate Obama said, ‘I believe that if our government is there to support you, this plant will be here for another hundred years,’ ” Ryan said in his speech. “As it turned out, that plant didn’t last another year. It is locked up and empty to this day.”

In fact, GM closed the Janesville plant a month before Obama took office as president.

Lauer also questioned Ryan on his remarks on Obama’s creation of “a new bipartisan debt commission.” “They came back with an urgent report,” Ryan said in his speech. “He thanked them, sent them on their way and then did exactly nothing. Republicans stepped up with good faith reforms and solutions equal to the problems.”

But as a member of the panel, Ryan had voted against sending its deficit-reduction plan to Congress for a vote — in effect blocking action on the panel’s recommendations.