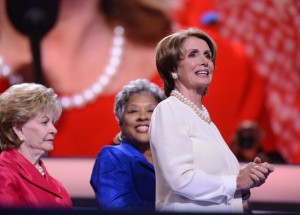 U.S. Rep. Nancy Pelosi (D-CA), former Speaker of the House of Representatives, is joined by other female Democratic members of the House at the 2012 Democratic National Convention at the Time Warner Cable Arena in Charlotte, North Carolina, Tuesday, September 4, 2012.

CHARLOTTE, N.C. — First lady Michelle Obama is scheduled to headline the opening Tuesday of the Democratic National Convention, an emotion-charged finale to an opening act designed to build enthusiasm among women and minorities whose votes are critical to re-electing her husband.

At the convention, the first lady’s speech will cap off an evening that was to feature San Antonio Mayor Julian Castro, the first Latino keynote speaker in convention history, as well as the chairman of the Congressional Hispanic Caucus, the first woman to reach the rank of Army three-star general, black members of Congress, and the convention chairman, Los Angeles Mayor Antonio Villaraigosa. Together, they serve as a not-so-subtle nod to the changing demographics of the nation.

“My family’s story isn’t special. What’s special is the America that makes our story possible,” Castro said in prepared remarks made available to the media before his speech. “Ours is a nation like no other — a place where great journeys can be made in a single generation. . . . No matter who you are or where you come from, the path is always forward.”

More than 300 miles away, Obama used the campus of a historically black university in Norfolk, Va., as his last campaign stop before he heads to Charlotte on Wednesday for the final two days of the convention.

“We’ve come too far to turn back now,” Obama said at Norfolk State University. “We’ve created a lot of jobs. But we’ve got more jobs to create.”

Speaking to an enthusiastic, primarily black audience, Obama cast the election as a choice between a president who looks out for the middle class and a candidate who’d raise taxes on them to cut taxes for the wealthy. He repeated his warning that Republicans are expecting dispirited Democrats to help them get elected and are running ads to underscore that “everything’s bad and it’s all Obama’s fault.”

The enthusiastic crowd estimated at 11,600 shouted “Four more years” and “We’ve got your back” as Obama talked about the onslaught of negative ads, warning they’d hear “more insults and distractions and baloney than you’ve ever seen. And it will be supported by $10 million checks from wealthy donors.”

Obama closed with an appeal to vote, talking of the importance of registering to vote and “setting an example for the next person in your class, or in your workplace. Or in the next town, or your cousin in the next state. You’ve got to call them and let them know what’s at stake.”

He said he planned to watch the first lady’s speech at the White House, with their two daughters, and would try not to let the girls see him cry, as her speeches make him “misty.”

While minorities and women voted for Obama in droves during the historic election of 2008, recent polls showed some have lost their excitement for the nation’s first black president. They may not vote for his Republican rival Mitt Romney, but some Democrats fear they could stay home on Election Day.

Latoya Fentress, 29, who attended the president’s rally at Norfolk State University, doesn’t buy the argument that Obama supporters aren’t as enthusiastic as four years ago. She said it’s easier to get health care for herself and her 6-year-old daughter, and friends who had lost jobs are back working. She’s enthusiastic enough that she went to the mall to have a T-shirt made for Obama’s visit: “My president is black.” On the shirt, she pinned a “Hot Chicks Dig Obama” button.

“Everyone I know is looking forward to voting for him a second time,” said Fentress, who works in radiation protection at nuclear power plants. “If not, they’ll be hearing from me.”

Obama and the Democrats will spend three days in Charlotte explaining the president’s record during four years of economic instability and his vision for a second term.

The nearly 6,000 delegates from across the nation who poured into Charlotte make up a noticeably younger, more diverse crowd than the smaller group that met in Tampa last week for the Republican National Convention. Women make up half the DNC delegates. Twenty-seven percent are black while 13 percent are Latino.

Lisa Fricke, a retired teacher and convention delegate from Nebraska, said she has tried to convince members of the large Latino population of her town about the need to cast ballots.

“I don’t think they understand how important this vote is,” said Fricke, who wore half-dozen buttons, including those that said: “Proud Nebraska Democrat” and “Educators for Obama.”