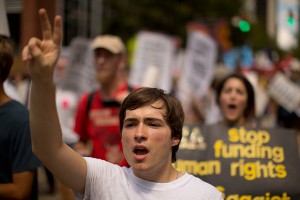 Protestors march on Sunday, September 2, 2012 in Charlotte, North Carolina. The Democratic National Convention is scheduled to run from September 4th-6th.

WASHINGTON — After months of laboring to define Mitt Romney, Democrats head into their national convention this week hoping to fuse his image with that of the Republican Party and its unpopular congressional caucus.

Obama’s team plans to portray the Republicans as an association of ideologues hoping to return to power with the election of a pliant White House servant who would follow a conservative, “tea party”-driven agenda.

In the Democrats’ version of the campaign, Romney is a man with little substance who has subordinated himself to the party’s most right-wing forces. Those include his running mate, Rep. Paul D. Ryan of Wisconsin, and other House Republicans and GOP candidates who espouse views about reproductive rights that Democrats say put them out of step with a majority of voters, particularly women.

Democratic strategists believe that casting the contest in such stark terms will animate their core supporters, while broadcasting a message that will win over the less partisan voters they need.

“Republicans are at the core now an ideological party,” David Axelrod, Obama’s longtime advisor, said in an interview. “They have a dogma they believe in, and they don’t really want to debate about the future.”

Viewers can expect that the Republican platform, which speakers almost never mentioned at the GOP’s convention, will be cited often at the Democratic National Convention in Charlotte, N.C.

The Republican platform plank that calls for outlawing abortion without exceptions for cases of rape, incest or to save the life of the mother has already become a feature of Democratic rhetoric. Also likely to come up is the GOP document’s opposition to same-sex marriage.

“If you look at their platform, the 2012 platform, it looks like it’s from another century, or maybe even two,” Los Angeles Mayor Antonio Villaraigosa, chairman of the Democratic convention, said on “Fox News Sunday.” “It looks like the platform of 1812.”

Republicans, for their part, have set up a counter-convention headquarters in Charlotte with plans to repeatedly raise one central question: Are Americans better off than they were four years ago?

“They’ve gone through a tick-tock of different strategies,” Romney spokeswoman Andrea Saul said of the Obama campaign. “They don’t have a rationale for re-election. Everything they’re trying is grasping at straws because they’re not able to talk about whether Americans are doing better.”

Democrats plan to talk more about the federal budget plans proposed by Romney and Ryan than either Republican candidate did at their convention in Tampa, Fla. Ryan, chairman of the House Budget Committee, has proposed deep cuts in federal spending and conversion of Medicare into a voucher plan.

Obama strategists say that Romney’s choice of Ryan greatly helps their cause. Ryan not only comes with the baggage of his budget, but he can also be tied to other members of the House Republican caucus, including the conservative tea party freshmen and Rep. Todd Akin of Missouri. Akin, who recently suggested that victims of “legitimate rape” rarely get pregnant from such assaults, has sponsored anti-abortion bills that Ryan has backed.

“When he chose Paul Ryan to be his running mate, that was the final piece of the merger,” Axelrod said. “There’s no daylight between him and that Congress.”

Congress — and its GOP members — haven’t been very popular since Republicans turned what had been a routine vote to raise the legal limit on the federal debt into a prolonged debate, raising the risk of a default. GOP and Democratic members were evenly matched in approval ratings throughout 2010, and then the Republicans took a dive in August of last year, according to the Pew Research Center.

“The Republican Party took a pretty big hit coming out of that debate,” said Pew Director Andrew Kohut. “What we saw were large numbers of people saying the Republican Party is a party that takes extreme positions, and that Democrats were the ones who were willing to compromise.”

Because the country is closely divided, the Romney and Obama campaigns have each deemed it critical to ensure that their party’s base turns out to vote, said Stephen Wayne, a professor of government at Georgetown University and author of “The Road to the White House 2012.”

“What Democrats fear most is extreme Republicans. What Republicans fear is extreme Democrats,” Wayne said. “So that’s why you hear that Obama is a socialist. You paint the opposition in extremist terms because that’s what frightens the base the most.”

Akin’s comments about “legitimate rape” fed into the Democratic strategy and prompted Romney to ask him to quit his race for U.S. Senate in Missouri, which seems to have reinforced Akin’s resolve to stay in.

Romney has tried to make clear that his views on abortion differ from Akin’s, which more closely match the party’s platform. Romney said during a radio interview last week that he opposes abortion “except for cases of rape, incest and where the life of the mother is threatened,” a statement his campaign says accurately reflects his position.

But Romney agrees with the party in opposing gay marriage and is a vigorous spokesman for the supply-side economic beliefs that power its positions on taxes and regulation.

Democrats argue that Romney and his party have more in common than not. On Medicare, the president’s advisers say voters will judge Romney not only on his statements but on his party’s record.

In the budget he wrote, Ryan proposed sweeping cuts in future Medicare spending, along the lines of what Obama has already enacted. Romney has disavowed the Ryan cuts and criticizes Obama’s.

“They’ve spent the last several weeks since Ryan’s been on the ticket trying to paper over their positions,” Axelrod said. “They’d like to put their party platform in the same vault where Romney’s tax returns are currently reposing.”