This news story was published on September 2, 2012.
Advertise on NIT • Subscribe to NIT 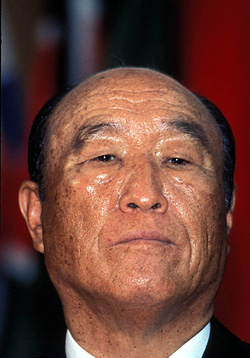 The Rev. Sun Myung Moon, the self-proclaimed Messiah from South Korea who led the Unification Church, one of the most controversial religious movements to sweep America in the 1970s, has died. He was 92.

Moon, who had been hospitalized with pneumonia in August, died Monday at a hospital in Gapyeong, South Korea, church officials told the Associated Press.

Although greeted as a Korean Billy Graham when he arrived in the United States four decades ago, Moon gradually emerged as a religious figure with quite different beliefs, whose movement was labeled a cult and whose followers were mocked as “Moonies.” At the height of his popularity, he claimed 5 million members worldwide, a figure that former members and others have called inflated. The number is believed to be only in the thousands today.

Moon offered an unorthodox message that blended calls for world peace with an unusual interpretation of Christianity, strains of Confucianism and strident anti-communism. He was famous for presiding over mass marriage ceremonies that highlighted Unification’s emphasis on traditional morality.

What also made Moon unusual was a multinational corporate vision that made him a millionaire many times over. He owned vast tracts of land in the U.S. and South America, as well as dozens of enterprises, including a ballet company, a university, a gun manufacturer, a seafood operation and several media organizations, most notably the conservative Washington Times newspaper. He also owned United Press International.

Moon was not charismatic in the usual sense. He spoke poor English and gave few interviews. His sermons, delivered through interpreters, rambled on for hours and often exhorted followers against using “love organs” in promiscuous behavior or homosexual relationships.

His ideas often seemed bizarre: He believed in numerology, proposed building a highway around the world and for a while embraced a Zimbabwean man as the reincarnation of a son who had died in an accident.

He courted the powerful with surprising success, at one time counting among his friends and allies Christian right leader Jerry Falwell, who defended Moon when he was tried and later convicted in the U.S. on charges of tax evasion; the Nation of Islam’s Louis Farrakhan, who shared pulpits with him; and former President George H.W. Bush, who appeared at Unification Church-affiliated events in the U.S. and abroad.

In 2004, Moon invited guests to a U.S. Senate office building in Washington, where he had himself crowned “none other than humanity’s Savior, Messiah, Returning Lord and True Parent.” The ceremony was attended by a dozen members of Congress, several of whom later told reporters they had been misled about the purpose of the event.

His religious journey purportedly began 16 years after his birth on Jan. 2, 1920, in what is now North Korea. According to biographical accounts, Jesus appeared to the young Moon on a Korean mountaintop on Easter Sunday in 1936. From this meeting Moon divined that his job was to complete Jesus’ mission of creating heaven on Earth.

During high school in Korea and at Waseda College in Tokyo, where he studied electrical engineering, Moon claimed to receive more messages from spiritual figures, including Buddha and Moses. He later said that Buddha told him to seek the unification of world religions “in a common effort to salvage the universe.”

After World War II, Moon founded a church and began preaching full-time, often speaking out against communism. His strong political stands caused problems with the North Korean government, which jailed him on charges of bigamy and draft evasion. He was freed in 1950.

In 1954, he founded the Holy Spirit Association for the Unification of World Christianity in Seoul. Three years later he published “The Divine Principle,” the main text of his church.

Moon’s beliefs did not go over well with leaders of mainline Christianity. He was turned down when he applied for membership to the major ecumenical organizations, the National Council of Churches and the World Council of Churches.

“His theology was heretical,” said David Bromley, a Virginia Commonwealth University sociologist who co-authored “Moonies in America,” a major study of the Unification movement during its peak in the 1970s.

Church members addressed Moon and his wife, Hak Ja Han, as the “True Parents,” a title that outraged many of the actual parents of Moon’s followers. The Moons moved to the U.S. in 1971 and eventually lived in a 35-room mansion on an estate in Irvington, N.Y.

Moon’s first marriage, to Choe Sung-kil, ended in divorce in 1957. He had a son with her and another with Kim Myung-hee, who lived with Moon during the 1950s. In 1960 he married Han, then a young disciple. They had 14 children, of whom 10 survive him. He was believed to have more than 40 grandchildren and numerous great-grandchildren.

Had Moon restricted his recruiting to ethnic Koreans, he might have avoided criticism, Bromley said. But the church began targeting white middle-class youths on or near college campuses, a tactic also pursued by two other sects that attained notoriety in the 1970s, the Children of God and the Hare Krishnas.

An anti-cult movement rose in opposition to the groups and created a market for “deprogrammers” who abducted church members and tried to reverse the brainwashing they believed was fundamental to the cults’ influence.

Moon promoted interracial and intercultural marriages and arranged thousands of unions. Couples matched by the church were instructed to refrain from having intercourse for 40 days, partly to ensure that the unions were based on “pure love” rather than carnal desire. In one of the church’s most publicized events, Moon blessed 6,500 couples in New York’s Madison Square Garden in 1988.

Followers were expected to live communally under austere conditions, although the church later moved away from group living as members matured and started their own families. Each member also was expected to raise money for the church, often by peddling flowers or other innocuous items at airports and shopping malls.

In 1978 Congress investigated the church as part of a broader probe into Korean influence-buying. A congressional subcommittee concluded that Moon’s organization had violated U.S. tax, immigration, banking and currency laws. In 1982 he was convicted on tax evasion charges and served 11 months in a federal prison in Danbury, Conn.

That year, he launched the Washington Times, which positioned itself as a conservative alternative to the Washington Post. It won loyal readers in the White House and among conservative strategists but has been a chronic money-loser, surviving on more than $2 billion in subsidies from the church. Circulation fell to about 40,000 daily copies in 2010, when a family feud caused the patriarch to repurchase the paper after having given control of it four years earlier to his eldest son, Preston.