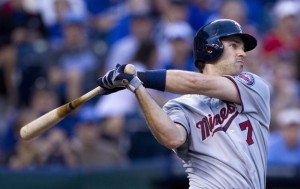 The Minnesota Twins’ Joe Mauer follows through on a grand slam in the second inning against the Kansas City Royals in the second game of a doubleheader on September 1, 2012, at Kauffman Stadium in Kansas City, Missouri.

KANSAS CITY, Mo. — If Twins righthander Cole De Vries is going to establish himself in the major leagues, he’ll eventually have to do more than get fat off the Royals. But for now, he’ll take wins any way he can get them.

De Vries was in total  control for most of his outing on Saturday as he helped the Twins beat Kansas City, 3-1, in the first game of a real doubleheader at Kauffman Stadium.

Why ‘real’ doubleheader? In this era, clubs separate the two games by having an early afternoon start, then an evening start. They kick everyone out after one game then make them spin the turnstiles again for a second game.

Not on Saturday. Remnants of Hurricane Isaac – the same storm that led to massive flooding in Louisiana and Mississippi – dumped 6.56 inches of rain on Kansas City in a 30-hour period. Friday’s game was washed out, but the Royals scheduled two games back-to-back on Saturday – a real two-for-one for heartland baseball fans.

They got to watch De Vries win back-to-back starts for the first time in his career, as he held the Royals to one run over 6u2154 innings. He’s 3-0 against Kansas City with a 3.06 ERA. He’s 1-5 against the rest of baseball.

“I guess I didn’t really know that,” De Vries said. “It makes me happy. That’s pretty good. Something’s working here and at home (against the Royals), whatever it is.”

It took De Vries a month to win his third major league game. It only took a few days for this fourth.

De Vries held the Royals to a single his first time through the order and Kansas City had three hits through five innings. The offense had carved out a 3-0 lead for him by then, on an RBI double by Justin Morneau in the first, then a sacrifice fly by Morneau and an RBI single by Ryan Doumit in the fifth.

The Royals began to figure out De Vries in the seventh. Mike Moustakas and Brayan Pena led off the inning with singles. De Vries fought back to strike out Jeff Francoeur and got Eric Hosmer to pop up a 3-1 pitch for the second out.

De Vries had two strikes on Johnny Giavotella. After pitching him away, he tried to bust him inside, and Giavotella fisted a RBI single to left to make it 3-1. De Vries was pulled after giving up one run on seven hits with no walks and three strikeouts.

The bullpen took it from there, and Glen Perkins came on in the ninth and earned his ninth save.

De Vries appears to be making a good case for himself for next season. He feels he’s made strides in recent starts, learning what it takes to compete at the highest level.

“Definitely. I think there’s something you can learn, whether it is something minimal or something major,” De Vries said. “Every time I go out there I try to use that principle and take what I can from a start. I think a lot of it too is getting more familiar with the guys I’m playing with and playing against. Just because I think so much of that comes into play in the big leagues, knowing guys’ tendencies and that can help.

“That’s one of the things I’m trying to get better at. Getting more exposure, getting more innings, pitching against guys so I can have that background and knowledge against them.”