Chiefs’ backups struggle in loss to Packers in preseason finale 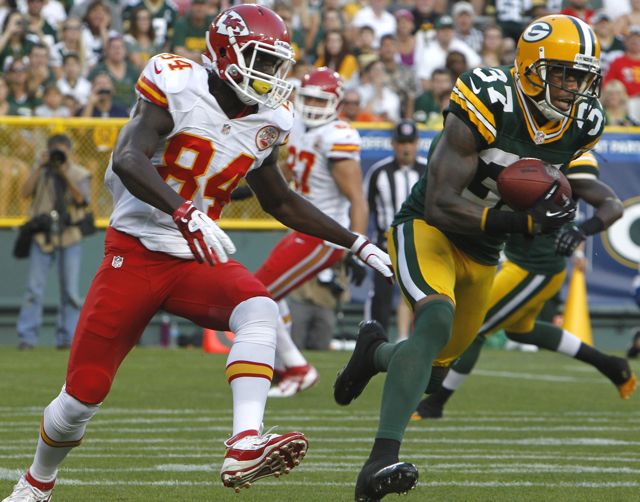 GREEN BAY, Wis. — Romeo Crennel said he was going to leave the Chiefs starters on the field until they accomplished something positive in Thursday night’s final preseason game against the Packers.

He was able to get them out before the end of the first quarter feeling they accomplished the goal. The Chiefs led by a field goal when both teams pulled their starters.

The situation quickly disintegrated for the Chiefs with quarterback Brady Quinn and other backups in the lineup. The Chiefs not only squandered a chance to extend the lead but were blown out in the final three quarters of a 24-3 defeat.

The Chiefs finished their preseason 1-3. They open the regular season on Sept. 9 against Atlanta at Arrowhead Stadium.

The Chiefs, already beaten up on defense, took another hit with ankle injuries to linebacker Derrick Johnson and defensive end Tyson Jackson. Quinn also suffered what the Chiefs called a neck injury.

Crennel said after the game that the injuries were “nothing major that I heard of.” But the injuries to Johnson and Quinn in particular are being evaluated carefully and could keep them from being available against the Falcons.

If the first quarter of Thursday night’s game is a gauge, the Chiefs have reason to feel good about their chances against Atlanta . They are built around their running game and defense, and both were strong against the Packers.

The Chiefs ran the ball on their first 10 plays, using four different running backs. After Matt Cassel threw one pass, a short completion to Dwayne Bowe, he was pulled from the game in favor of Quinn.

The Chiefs then ran the ball the next three plays before they began to mix the play calls. The Chiefs finished the game with 247 rushing yards.

“That’s the way we practiced on Monday,” Crennel said. “We worked hard on the running game and those guys worked hard at it, so we said, ‘Let’s take a look at it and see what we can get done.’

“It was effective, I thought.”

Getting the running game going is a necessity for the Chiefs, who will ask much of their top two backs, Peyton Hillis and Jamaal Charles. On the two possessions with all or most of the starters in the game, the Chiefs rushed 16 times for 83 yards.

“It’s about playing the kind of football we want to play,” tackle Eric Winston said. “We knew it was going to be like that tonight. We were able to break off some runs. We want to be a running team, a play-action-passing kind of team. There aren’t a lot of teams in this league that are successful dropping back and passing 40 times a game.

“I love our backs. I love what Peyton brings. I love what Jamaal is bringing, Shaun Draughn, all those guys. They’re perfect for what we’re doing.”

The offense played two possessions using most or all starters and twice moved into position for field-goal attempts by Ryan Succop. One, a 54-yarder, fell short. Succop made the other, from 26 yards.

Still, for all their running success, the Chiefs managed just the one field goal.

The Chiefs had a chance to extend their lead with Quinn at quarterback early in the second quarter. He led an efficient drive that got the Chiefs to the Green Bay 5. But on second down, Quinn made a puzzling choice by forcing a late throw to Jamar Newsome in the end zone, and the pass was intercepted by Sam Shields.

Earlier, Quinn’s poorly thrown fade pass for Jon Baldwin in the end zone was also intercepted, but the play was called back because of a penalty.

Meanwhile, the first-string defense made Aaron Rodgers and the starting Green Bay offense go three plays and out twice in two possessions. The Chiefs made running back Cedric Benson fumble, but Green Bay recovered. Stanford Routt also saw an interception called back because of Dontari Poe’s offside penalty.

“I wanted our guys to look halfway efficient,” Crennel said. “I thought offensively and defensively we were efficient and got some things done. We moved the ball and we got them off the field.

The Chiefs were penalized 14 times for 126 yards.