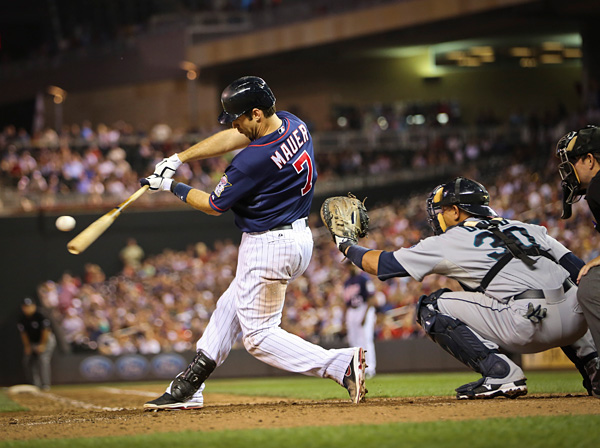 MINNEAPOLIS — This time, the Twins got their offense going to go with a strong pitching performance.

The Twins had scored more than four runs just three times in their previous 13 games, but got untracked against Seattle lefthander Jason Vargas, who entered the game 6-1 with a 2.55 ERA in his past 11 starts.

Mauer opened the scoring with a two-run single in the third, and Justin Morneau added a bloop RBI single to make it 3-0.

Plouffe crushed a two-run homer in the fourth as the Twins took a 5-0 lead. The blast landed in the bullpen in left-center field and was estimated at 411 feet. It was also Plouffe’s first home run in 118 plate appearances going back to July 3.

Willingham added a solo blast in the fifth to make it 7-0. Vargas barked at home plate umpire Doug Eddings as Willingham circled the bases, upset that the pitch before the gopher ball wasn’t called a strike.

Deduno, who has said his fastball has unpredictable movement, held Seattle to two hits through seven innings with a career-high nine strikeouts. He received a standing ovation as he walked off the mound after striking out Justin Smoak to end the seventh.

Twins outfielder Denard Span will have to battle a sprained SC joint in his shoulder area for the rest of the season.

The SC joint is the connection between his breastbone and his collarbone. Span said it will take four to six weeks for it to heal properly, but that will have to wait until the season is over. Span might be out of action for a few days, but he plans on playing when he can tolerate the discomfort.

He will take anti-inflammatory medication and might get an injection in the area.

Span was injured while making a falling catch on Aug. 12. In recent days, he’s had trouble swinging a bat.

“The big goal of mine was to play start to finish and finish the whole season,” he said. “These last two weekshave not been fun for me.”

Twins lefthander Scott Diamond has dropped his appeal of a six-game suspension for throwing a pitch over the head of Texas slugger Josh Hamilton last Thursday. He will begin his suspension immediately.

Diamond said he followed the recommendations of the player’s association.

“I’m more disappointed that I won’t be able to contribute,” he said. “I stand by my actions. What happened, happened and that’s how it all played out.”

— Outfielder Joe Benson had surgery on Monday to remove loose bodies from his left knee. But Twins doctors also found a problem with the bone under the kneecap. Benson will be shut down for three to four months.

— First baseman Chris Parmalee was called up on Wednesday and Jeff Gray was outrighted to Rochester.