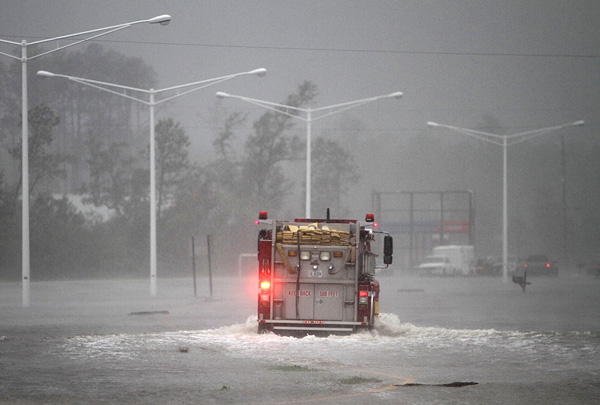 NEW ORLEANS — On the seventh anniversary of Hurricane Katrina on Wednesday, this city absorbed a rough reminder of the Gulf Coast’s vulnerability as big, slow Hurricane Isaac delivered a punishing but less powerful blow than its catastrophic predecessor.

The massive storm lingered all day, lashing the coast with torrential rains and hurricane-force winds. Flooding was widespread from New Orleans through Mississippi and Alabama as downed trees and power lines left more than 600,000 customers without electricity.

An upgrade of New Orleans’ 133-mile flood control system largely withstood the deluge, but to the west, St. John the Baptist Parish was inundated by storm surge from Lake Pontchartrain and Lake Maurepas. Louisiana Gov. Bobby Jindal said Wednesday night that officials had evacuated about 1,500 people and had about that many to go.

Elsewhere along Lake Pontchartrain, 60 people were rescued from a flooded area of St. Tammany Parish, said Christina Stephens, spokeswoman for the governor’s Office of Homeland Security and Emergency Preparedness.

And in isolated Plaquemines Parish, where Isaac came ashore Tuesday night, floodwaters spilled over part of a locally maintained 8 1/2-foot-high levee, drenching parts of the sparsely populated area under 12 feet of water. More than 100 residents were rescued by a flotilla of police, National Guardsmen and volunteers.

For all the flooding and dislocation, Isaac was nothing like Katrina, largely because local and federal officials learned from the 2005 catastrophe. Emergency efforts were much better coordinated, most residents were evacuated in good order and the revamped flood control system held up. Statewide, at least 7,700 people have been evacuated, Stephens said.

Even with relentless rain, Isaac lacked Katrina’s catastrophic maximum 28-foot storm surge and 125-mph. winds. Katrina, a strong Category 3 hurricane when it came ashore, caused more than 1,800 deaths, most in Louisiana. By Wednesday night, there were no reports of deaths directly attributable to Isaac.

The storm made landfall as a Category 1 hurricane with maximum sustained winds of 80 mph and a storm surge of 6 to 12 feet. It was downgraded to a tropical storm Wednesday afternoon, even as rains and winds continued, floodwaters rose and tornado warnings were issued. By 10 p.m., its sustained winds had dropped to 60 mph.

Isaac was expected to lumber through Louisiana overnight and into Thursday, passing into Arkansas Thursday evening. The hurricane center warned of rainfall accumulations up to 25 inches, and reported that 22.5 inches had fallen in Arabi, next to the Lower 9th Ward.

For many in New Orleans, Isaac’s chief offense was its glacial pace, 6 mph.

Isaac also was noteworthy for its 350-mile girth. Tropical-force winds extended 175 miles from the storm center.

Louisiana officials warned residents not to relax, for the storm’s effects could last into Friday. “Now is not the time to let your guard down,” Landrieu said.

“There is much more coming,” Jindal said.

By late Wednesday, one-third of Louisiana households — roughly 660,000 homes — were without power, including 160,000 in Orleans Parish, according to New Orleans-based Entergy spokesman Chanel Lagarde. Thousands were also without power in Mississippi.