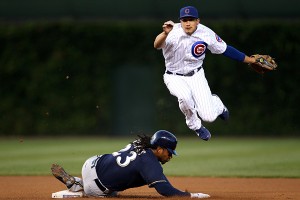 CHICAGO — In spring training, Jeff Bianchi made what seemed to be a minor change in his approach at the plate.

On Tuesday night at Wrigley Field, it paid huge dividends for the Milwaukee Brewers.

The rookie shortstop, who’s been red-hot since being called up from Class AAA Nashville over the weekend, hit a three-run homer in the second inning off Chicago Cubs starter Travis Wood in a situation he wouldn’t have otherwise been swinging the bat.

(PHOTO: Chicago Cubs second baseman Darwin Barney leaps over the Milwaukee Brewers Rickie Weeks (23) as he completes a double play off a grounder by Ryan Braun in the first inning at Wrigley Field in Chicago, Illinois, on Tuesday, August 28, 2012.)

That shot, combined with seven more standout innings from Yovani Gallardo, was more than enough for the Brewers as they notched their seventh consecutive win over the Cubs, 4-1.

The homer was the fifth hit in as many at-bats over four games for Bianchi, who started in place of Jean Segura, and it came on a 3-0 count with one out and a pair of runners on base.

Wood, who’d pitched well in a start against the Brewers last week, left an 88-mph fastball out over the plate. Bianchi, who had five homers to his credit in the minor leagues, unloaded on it and sent it into the bleachers in left.

“I was glad he did, not just because of the outcome. Most young players won’t swing there. It’s hard to get a lot of veteran players to swing on 3-0. It’s not an easy count.”

Bianchi, whom the Brewers claimed off waivers from the Cubs in early January, credited a conversation he had with Roenicke not long after that for his willingness to swing on 3-0.

“Before this year, I always took 3-0,” he said. “Coming into spring training, Ron had said be aggressive. On 3-0, you get a pitch, take a good swing at it. A lot of guys don’t like swinging 3-0; I never used to. There’s situations for it. But you get more comfortable with it.”

Bianchi is in his third stint with the Brewers this season. He started out 0 for 15 before finally breaking through with his first major-league hit — a single — in Pittsburgh on the day of his call-up.

He collected another single and double to close out that series, then singled in a pinch-hitting role Monday in Chicago. He now finds himself hitting .227 and gaining confidence with each at-bat.

“I don’t think I was putting too much pressure on myself because I’ve gone 0 for (15) before in my career,” he said. “It’s part of the game. But after that first one came, I felt like I might have just kind of relaxed a little bit.”

Staked to that 3-0 lead, Gallardo was masterful save for one mistake.

That came in the third inning and against Wood, of all people. Ahead in the count, 0-2, Gallardo left a fastball up that Wood sent out to left for a homer to make it 3-1.

“He can swing it pretty good,” said Gallardo, who’s now won his last six starts and is 14-8 overall. “I saw that my last start in Milwaukee. Just tried overthrowing it and it came back over the middle and he hit it out.”

Gallardo followed that with a pair of walks but finally got Starlin Castro to ground out to end the inning.

After that, it was smooth sailing for the right-hander, who retired 12 consecutive batters over the next four innings before finally making way for Francisco Rodriguez for the eighth. Gallardo allowed three hits, three walks and struck out nine.

“He held them down. I mean, 0-2, yeah, it was a bad pitch to Wood. But he’s still coming at him. Other than that, outstanding.”

Wood also managed to settle down after Bianchi’s homer, allowing just a double to Ryan Braun and single to Norichika Aoki before also leaving after the seventh.

Aoki led off with a double and stole third. Rickie Weeks followed with a walk to put runners on the corners and then was picked off first by Alberto Cabrera.

Weeks stayed alive long enough to make second baseman Darwin Barney chase him down and tag him for the out. Aoki, reading the play all the way, timed his jump home perfectly and slid in to make it 4-1.

“Rickie was running on the play,” Roenicke said. “Once he got caught, Nori did a nice job. The timing of it, once he had that infielder running 100 percent trying to get Rickie, it’s really tough to then spin and get Nori.”

Rodriguez pitched a 1-2-3 eighth, handing the ball to John Axford in the ninth with a three-run lead. Of lesser importance, but still notable, was the fact the Brewers needed one more strikeout to run their streak to eight straight games with 10 or more.

After getting Anthony Rizzo to ground to Corey Hart for the first out, Axford struck out Alfonso Soriano swinging and Castro looking to end it.

“I actually thought about it after the last out of the game,” said Axford, who picked up his 21st save. “I was like, ‘Huh, Yo already got the 10.’ But I found out he had nine, so I guess I got the one extra I needed.”