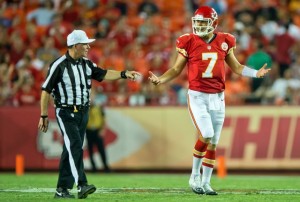 Eat dinner, put the kids to bed and then haul out the white grease board and colored markers.

Lauren opened the Chiefs’ fifth new playbook in four years and called out a play or a formation. Matt had seconds to draw it up on the board, explain the nuances of the play, repeat the call in the huddle and give the snap count until he got it right.

She also used flash cards and quizzed the quarterback on new code words new offensive coordinator Brian Daboll brought with him — terms such as bingo and bomb — that would describe protections or formations.

“My wife was a collegiate athlete, a team captain of a national champion,” Cassel said of Lauren, who played volleyball at USC, “and she understands the demands and respects the process. She really got after it.”

Few, however, can truly understand the demands and responsibilities thrust on Cassel, now in his fourth season as the Chiefs’ starter.

Cassel, 30, is in a make-or-break season with the Chiefs. He’s in the fourth year of the five-year, $63 million contract he signed when the Chiefs acquired him from the Patriots at the start of the Scott Pioli regime in 2009.

He’s 18-21 as a starter with the Chiefs, though he bounced out of a hospital bed fewer than two weeks after an appendectomy and sparked them to an AFC West title in 2010. He missed the last seven games of 2011 because of a broken hand.

Cassel was booed at the All-Star Game’s celebrity softball game at Kauffman Stadium this year, but his No. 7 jersey jumps off the shelves at sports shops all over town.

“Quarterback is always a focal position,” Cassel said. “The thing about our fans . . . I’ve been asked about the boos at the softball game, but the fact of the matter is I’m in the grocery store, and people come up and say, ‘I support you, great job . . .’ and I’m out with my wife, and they come up to us, thanking us, offering to buy us a drink.

“I live here year-round. A lot of people think I go back to California. I don’t. I love Kansas City. I love being here, and the people have been amazing to myself and my wife. You hear this stuff, a lot is written about the fans not liking Matt Cassel, but since being here, I haven’t experienced that. I’ve experienced a lot of people who are very supportive and positive. “

Still, anything less than an AFC West title, or at least a wild-card playoff berth, will be considered a failure this season — and Cassel, in the public’s eye, will be the scapegoat. Cries for drafting and developing a quarterback for the future will be loud in 2013 if the Chiefs stumble in mediocrity this year.

“He can be good enough for us to win a championship,” Pioli said of the quarterback he brought with him from New England after Cassel, in his first opportunity to start since high school, took over for an injured Tom Brady and went 11-5 in 2008.

“I’ve seen teams with situations similar to what the Patriots had in 2008 make changes with a quarterback, and the team completely tanked,” Pioli said. “That team won 11 games â€” not in spite of him, but because of him, at times.

“In 2010, we (Kansas City) won games because of him. Go back to that St. Louis game, when he’s coming off having his appendix removed. He not only makes plays . . . the things he did changed the energy in the course of that football game. Running with the ball and running for first downs when he wasn’t supposed to be running, by the way. He’s one of the toughest football players I’ve been around.”

If there was any question whether Cassel had control of the Chiefs’ new offense, it came on the second play of the second series of their preseason opener against Arizona.

Cassel wasn’t sure the play Daboll sent in would work, so he audibled to an inside running play.

Cassel went with an inside handoff to Peyton Hillis, who bolted 28 yards from the Chiefs’ 39 to the Arizona 33, setting up a touchdown.

Those late-night chalk talks and flash-card sessions paid off.

“Coach Daboll preaches, if you see something and you have a reason for getting us out of a bad play, then let’s do it,” said Cassel, who appears much more at ease this season than in his three tempestuous years under former head coach Todd Haley.

“That makes it fun, and it makes you part of the offense . . . and you have to study that much harder.”

Chiefs right tackle Eric Winston, playing in his first game with the team, was amazed at how Cassel ran the offense, because quarterbacks did not change plays at the line during his six years in Houston.

“I’ve been impressed not just with the way Matt delivers the ball, or the way he bounces around, but his command of the offense,” Winston said. “How many audibles, and how many different things Daboll has asked him to do . . . in the Arizona game, he checked to multiple different plays . . . he knew what was going to best suit us, and he got to it. That’s a lot harder for a quarterback to do in this league than people realize.

“He’s got the full playbook at his disposal. I like it when a quarterback knows what he’s doing, and Matt Cassel knows what he’s doing. He has a grip on this offense, and when you have a quarterback like that, it only makes sense to give him more reins. He’s the one out there, he’s the one who sees things, and at the end of the day . . . Matt Cassel doesn’t have to make plays just with his arm. He can make plays with his eyes with his audibles.”

Some of that playbook has its roots with the New England Patriots, where Daboll spent 2000-06 as a receivers coach and Cassel was Tom Brady’s backup for two of those years. But Daboll added his own touches from his time as coordinator at Cleveland and Miami during the past three years.

“He does what every good offensive coordinator does,” Cassel said. “He looks at our personnel and who does what the best. So we try to utilize their strengths rather than just run plays to run plays. He looks at, ‘What does Dexter McCluster have?’ He has great quickness. ‘What does Jon Baldwin do?’ You go down the list and try to create a package that utilizes peoples’ strengths.”

So being surrounded by all this talent — including running back Jamaal Charles and tight end Tony Moeaki, who are returning from knee surgeries; newcomers Hillis, Winston and tight end Kevin Boss; and starting receivers Dwayne Bowe and Steve Breaston — must be putting even more pressure on Cassel to win big this season, right?

“It takes pressure off me,” he said. “If you can get the ball in the playmakers’ hands, and let them make the plays, it makes it a little easier on you.”

Trent Green has walked in Matt Cassel’s shoes. Green, like Cassel, struggled in his first year with a rebuilding Chiefs team after being acquired for a first-round draft pick in 2001. He eventually led the Chiefs to the playoffs in his third year and went to two Pro Bowls.

Green didn’t possess a powerful arm, but he still threw for 4,000 yards three times in his career with the Chiefs. He sees no reason Cassel can’t do that, too.

“Look at his accuracy,” Green said of Cassel, who completed 58 percent of his passes with 27 touchdowns and seven interceptions in his Pro Bowl season of 2010. “Matt can be great in this league. I hear comments about his arm . . . but you don’t have to go down the field that far. You need to be accurate inside of 30 and 40 yards. Very seldom do you throw the ball 50, 60, 70 yards downfield. I think he has those tools.”

Green also lived in Kansas City year-round. He felt that was an important commitment for the leader of a team. Cassel spent a good part of his summer throwing to Baldwin, Boss and others.

“For me, that was always an important factor, living in the town I played in, because I wanted to be there around the guys working out with them.” Green said. “That’s why he’s won over a lot of his teammates. That’s why you don’t see a lot of finger-pointing in the locker room. When things are going bad, I think everybody has his back.

“He has good leadership. He’s in the weight room, he’s in the meeting rooms, he’s spending time with the guys, and that carries a lot of weight with them. They like to see their quarterbacks in there putting in the work.”

No matter how much work he puts in, Cassel will be measured by how many games he wins.

“He’s been a winner,” Winston said. “He’s been with two different teams that have won 10 games or more. Last year, it’s pretty safe to say if he stays healthy, (the Chiefs) go to the playoffs again.”

Cassel realizes what is at stake. For himself, for the team and for a community desperate for a winner.

“Every year is a critical year,” he said. “I feel great about where we are. It’s an exciting time for me and the rest of the team. We definitely have more depth than at any time since I’ve been here. We have a great coaching staff. There’s no question this can be a breakthrough year.

“In order for us to be successful, no one man can make or break a team.”

Chiefs quarterback Matt Cassel is working with his fifth offensive play-caller in his four years in KC:

Charlie Weis: Hired as coordinator in 2010.