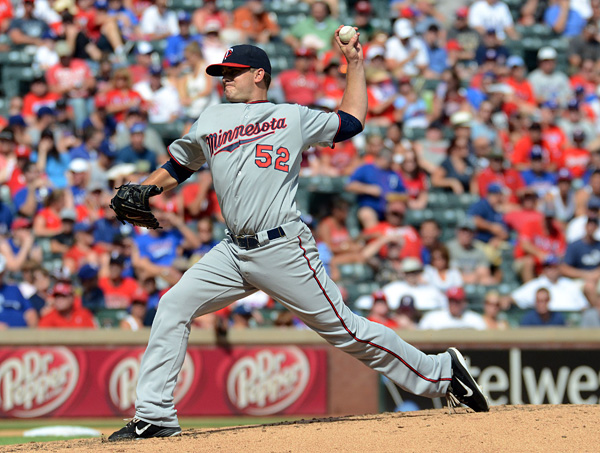 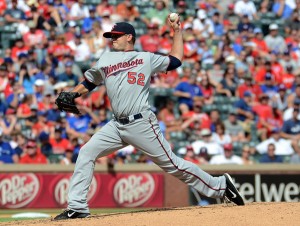 ARLINGTON, Texas — Brian Duensing didn’t think Ian Kinsler got all of his 1-1 changeup in the first inning, but it ended up in the seats for a home run — and the first sign that it was going to be a long afternoon.

Texas scored two runs in the first inning, and Duensing hung his head as he walked off the field. The Rangers weren’t done; they went on to rip the Twins, 9-3.

With two on in the second, Mitch Moreland got a 1-2 pitch down the middle of the plate and hit it 463 feet — third-longest in the history of Rangers Ballpark in Arlington — and into the upper deck in right for a 5-0 lead.

Duensing was knocked out during the Rangers’ four-run third. It was 9-0 then. The nine earned runs are Duensing’s career high.

“That bad day came at the worst time possible,” said Duensing, who left many pitches up in the strike zone and was charged with nine earned runs over 2 2/3 innings. “Our bullpen is already struggling, being worn out. I didn’t do my job at all.”

The bullpen actually pitched a shutout, but the damage was well done by then.

The Twins have lost the first three games of this four-game series by a score of 27-9. They are 1-8 on this 10-game road trip with one game to go, outscored 51-24 in those games.

They have lost 14 of their past 16 games — scoring three or fewer runs in 11 of those games.

They are withering during the dog days of August.

“You get in those holes and it kind of drains you a bit,” Twins manager Ron Gardenhire said. “You just have to keep plugging away the best you can.”

Justin Morneau was the Twins’ bright spot, going 4-for-4 with his 17th home run.