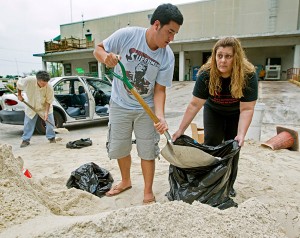 TAMPA, Fla. — An approaching tropical storm, forecast to become a hurricane as it roars into the Gulf of Mexico on Sunday, has forced postponement of the first day of the Republican National Convention here, party officials announced Saturday evening.

The opening session Monday was to have featured Mitt Romney’s formal nomination by thousands of convention delegates as the party’s 2012 presidential standard bearer. A planned speech that evening by Romney’s wife, Ann, had previously been moved to Tuesday because the commercial broadcast TV networks are not carrying events from the first night.

(PHOTO: Connie Rivero gets help from her son, Anthony Amador, of Miramar, Florida, with filling plastic bags with sand at the Hollywood Public Works Department as they prepare for possible floods from Tropical Storm Isaac on Saturday, August 25, 2012.)

Instead, the gathering will nominally open Monday and then immediately adjourn, officials said. The plan — at least for now — is to reconvene Tuesday. The exact time won’t be announced until later when officials are able to assess any damage from the storm, which is expected to peak Monday in Tampa.

“Our chief priority is the safety of the residents of Florida, of those visiting the convention, and all those in Gulf Coast states who may be impacted by Tropical Storm Isaac,” Bill Harris, the convention president, said in announcing the postponement.

Harris, in a prepared statement, said the scheduling changes “will help ensure the continued safety of all participants — our foremost concern. We are also committed to keeping the delegates and guests of the convention well-informed about the situation, and we will continue providing updates in the hours and days ahead.”

Officials said the decision was unanimous among party officials, convention organizers and the Romney campaign.

According to the National Hurricane Center, Tropical Storm Isaac is expected to remain over water off Florida’s west coast, eventually making landfall on the north Gulf Coast, somewhere between the western Florida panhandle and Louisiana.

The giant storm is forecast to pass close enough to the Tampa area to deliver a battering of rain and tropical-storm-force winds of 39 to 73 mph, starting as early as Sunday night and continuing through Monday. A gala welcome party for 20,000 convention participants, scheduled for Sunday evening, was still on as of Saturday night.

Thousands of the GOP delegates and other convention participants are being housed in resort hotels along a coastal barrier island that is expected to bear the brunt of the storm in the Tampa-St. Petersburg area. They will be advised as early as Sunday morning if it will be necessary to evacuate to higher ground inland, officials said.

Cancellation of at least the first day of the convention is the latest setback for Romney, whose campaign has been dragged off-message and off-plan over the last week or more. The four-day production has long been conceived as one of the best opportunities between now and the election for Romney to better acquaint the nation’s voters with his record in government and private life, his position on the issues and personal character.

Last week, the campaign was sidetracked by a Missouri GOP Senate candidate’s incendiary remarks about rape and abortion. The controversy shed unwanted light on strict conservative stances that Romney espoused on social issues in the primaries that could complicate his efforts to woo independent suburban moderates, particularly single women, in November.

A recent concentration in the presidential campaign debate on Medicare, an issue that could prove damaging to Romney in senior-heavy Florida, a must-win state for Republicans, has also pulled Romney away from his earlier focus on high unemployment and a sluggish economic recovery, the issues widely regarded as the greatest threat to President Barack Obama’s re-election.

Russ Schriefer, a top Romney adviser and the producer of the convention, said in a conference call Saturday evening that the Republicans can squeeze into three days what they had planned to do in four.

“We will absolutely be able to get our message out,” Schriefer said. “We have the opportunity to tell to the American people the story of the last four years, of how President Obama’s failed leadership has failed this country and how Mitt Romney can do better and provide a better future for Americans.”

Romney is currently scheduled to deliver his acceptance speech at the convention arena in Tampa on Thursday night. The tropical storm is forecast to be out of the Tampa area by Tuesday evening. That presumably would give organizers enough time to salvage at least the final two days of the gathering, unless there is widespread damage.

For several days, party officials and Florida Gov. Rick Scott, a Republican, have sought to play down the potential weather threat to the convention and steadfastly refused to discuss contingencies.

That upbeat tone continued even as party officials were forced to take a step they clearly had hoped to avoid.

“Here’s the deal. We’ll know on Monday how severe this tropical storm is,” Republican National Committee Chairman Reince Priebus said on a conference call. “We’re not going to put delegates on a bunch of buses over the bridges between Clearwater and St. Pete when we can’t predict how severe the wind is going to be and how severe the damage might be.”

Only the day before, Priebus had said he was breathing easier about any possible cancellation and expressed optimism that the event would go off without a hitch.

The decision means that for the second time in four years, the start of the GOP convention will be disrupted by weather.

In 2008, organizers cut short the opening night of the Republican convention in St. Paul, Minn., to refocus national attention on preparations for an approaching hurricane in the Gulf, 1,000 miles away.