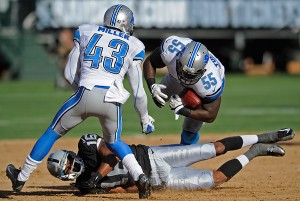 OAKLAND, Calif. — One by one, they hobbled to the sideline with some body part in a state of disrepair. First it was a shoulder, then a hand, then an ankle, then another.

For the Lions, Saturday’s third exhibition game — usually a chance for starters to get their most extensive work before regular-season games begin — could hardly have been more painful.

Matthew Stafford suffered an injury to his left (non-throwing) hand in the second quarter, starting cornerbacks Bill Bentley and Chris Houston left with shoulder and ankle injuries, respectively, and on the day Mikel Leshoure made his Lions debut, running back Kevin Smith limped off the field with a bum ankle in a 31-20 loss to the Raiders.

Lions coach Jim Schwartz said in a halftime interview with WXYZ-TV that Stafford’s hand appeared to OK. But Stafford spent a good chunk of the first half on the sideline with his hand wrapped in ice and covered by a towel.

When he walked off the field at halftime, he had black tape or a small brace on his hand.

Stafford finished eight of 10 passing for 68 yards, but he left after his final incompletion 2 minutes into the second quarter.

Leshoure missed a block on the play, and Raiders defensive end Dave Tollefson drove Stafford to the ground after he rushed a pass to Titus Young.

Shaun Hill replaced Stafford, who played three games last year with a broken finger on his right hand, and led the Lions to a third-quarter touchdown before giving way to Kellen Moore in the fourth.

Bentley, a rookie third-round pick who’s the front-runner for the right cornerback job, was the first Lion to drop Saturday, leaving the game’s opening series with a shoulder injury after he gave up a 13-yard pass to Rod Streater. Safety John Wendling appeared to hit Bentley on the play.

Houston suffered his ankle injury midway through the second quarter after he got beat for a 41-yard pass by Darrius Heyward-Bey. He spent most of the rest of the half sitting on the Lions’ bench with ice on his left foot.

With Bentley and Houston out, Jacob Lacey and Justin Miller finished the first half at cornerback for a Lions team starving for secondary help.

Smith suffered the ankle injury on the opening drive of the second half and hopped to the sideline without putting any weight on his right leg. He returned to the locker room briefly, walked back under his own power but did not re-enter game.

Smith started and finished with three carries for no yards, but Leshoure got the bulk of the first-half work at running back in his first game since his final season at Illinois, Dec. 29, 2010, in the Texas Bowl.

Leshoure, who missed all of his rookie season with a torn Achilles tendon and did not play in the first two exhibition games because of a hamstring injury, played 18 straight snaps (including three plays nullified by penalty) in the first and second quarters.

He finished with five carries for 1 yard, had little rushing room to work with, but did show his physical side when he bowled over a tackle on his lone reception for 6 yards.

Though Leshoure is suspended for the first two games of the regular season, the Lions expect him to play a big role when he returns for an offense that ranked 29th in rushing last year.

The Lions, who fell to 1-2 this exhibition season, managed just six points in the first half on field goals of 41 and 30 yards by Jason Hanson.

Defensive end Willie Young continued his strong exhibition season with two tackles and an interception late in the first half inside the Oakland 10-yard line, but the Lions failed to capitalize on the good field position.

Carson Palmer completed 17 of 26 passes for 181 yards for the Raiders, and Darren McFadden scored on fourth down from the 1-yard line on a play that was originally ruled a stop on the field.