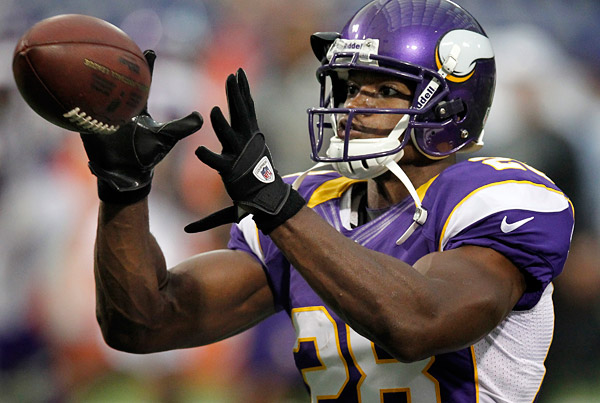 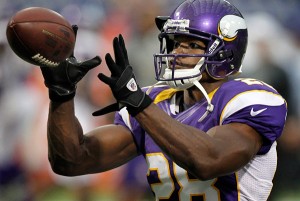 MINNEAPOLIS — Feel free to read the fine print regarding the Vikings’ early offensive ineptitude during Friday’s 12-10 home loss to the Chargers.

It will remind you that receiver Jerome Simpson did not play, held out as the Vikings prepare to play the first three regular-season games without him. As expected, running back Adrian Peterson didn’t play either. And with Toby Gerhart’s health crucial heading into the regular season, he took his final carry with 2 minutes, 32 seconds left in the first quarter.

(PHOTO: Minnesota Vikings running back Adrian Peterson, coming off a knee injury, warms up with the team prior to playing host to the San Diego Chargers at Mall of America Field in NFL preseason action in Minneapolis, Minnesota, on Friday, August 24, 2012. )

A month from now, upon Simpson’s return, the Vikings hope they’ll have all their weapons available. Gerhart will be the backfield workhorse to start the season with Peterson’s Sept. 9 return still likely. Tight end John Carlson should be back soon, too.

And if Friday’s early effort was any indication, the Vikings will need help going forward.

San Diego won on a 45-yard Nick Novak field goal as time expired. But the Vikings began crawling into their grave far earlier.

On eight first-half possessions, they came away with only three points. And those came after a stalled 12-yard drive that was set up by a strong Chris Kluwe punt, an impressive three-and-out defensive stand and a subsequent 24-yard punt return by rookie Jarius Wright.

Beyond that, the first-half struggles included two turnovers, four punts, a missed field goal and only seven first downs on eight possessions.

Two more fumbles followed in the second half.

All that momentum that seemed to be building through efficient performances by the first string against the 49ers and Bills? Friday’s effort was less crisp than a three-hour-old bowl of Corn Pops.

You can fault quarterback Christian Ponder if you’d like. After all, he posted a first-half rating of 45.7 as the Vikings fell into a 6-3 halftime hole. And his first interception of the preseason was so telegraphed toward Percy Harvin that two Chargers defensive backs jumped the route and fought for the pick before DeAndre Presley won the battle.

“We had talked about throwing a quick burst route to Percy out there,” Ponder said. “And they completely disregarded (Michael) Jenkins on his route. So the guy just buzzed underneath and picked it.”

Throughout the night, Ponder (9-for-16, 115 yards) didn’t get much help. His protection broke down repeatedly — the Chargers sacked Ponder five times and hurried him on at least four other occasions.

And with Simpson out, the receiving corps, to steal a description from Denny Green, was what we thought it was: ordinary and low on quality depth.

Take out Harvin’s 40-yard grab on a bomb up the right sideline and Vikings receivers recorded only two other catches in the first half for 26 yards.

That looming three-game suspension Simpson faces to open the regular season suddenly seems like it might be debilitating.

The offensive line’s effectiveness also will have to improve, though Ponder fell on the sword for some of Friday’s breakdowns, admitting he was too stagnant in the pocket against the Chargers’ 3-4 defense.

“I got myself in trouble,” he said. “We talked about it on the sidelines. I was getting back on the top of my drop and kind of just sitting there. And that puts a lot of pressure on our tackles. I need to do a lot better job of stepping up and moving forward.”

Yep, it was a sloppy, mistake-filled night.

In all, both teams produced almost as many penalties (20) as points (22). And the environment felt so lifeless that not even Jared Allen could muster up the excitement to do his calf-roping celebration after his two sacks. After all, Allen had only beat San Diego rookie left tackle Mike Harris, a reserve, to take down quarterback Charlie Whitehurst, also a backup.

So the Vikings’ solid defensive effort, while low on mistakes, doesn’t register as all that notable. Yes, there were six sacks with Jasper Brinkley, Fred Evans and Nick Reed joining Allen in the fun. And San Diego converted just three of 16 third downs while settling for 202 total yards.

But the Chargers opted to hold out starters such as quarterback Philip Rivers, tight end Antonio Gates and left tackle Jared Gaither, essentially throwing a B-team offense onto the field.

“I really liked some of the things our first-(team) defense did,” head coach Leslie Frazier said. “They played extremely hard. We didn’t come up with the turnovers that we’d like. But I thought our first unit did everything we asked.”

The Vikings now have just two weeks left to clean things up before going under a much more intense microscope.