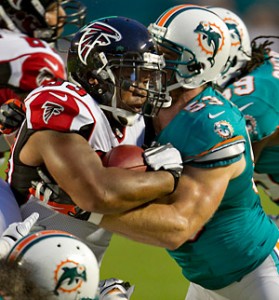 MIAMI — The Miami Dolphins spent the first two exhibition games working on the pretty plays, polishing up the passing attack and holding a quarterback competition.

Miami’s coaches admittedly neglected the rushing game until Friday night against the Falcons when the Dolphins gained 61 rushing yards on 13 carries in the first half.

Starting tailback Reggie Bush opened the game with an 18-yard run behind the left side of the offensive line.

Bush would lose a total of 1 yard on his next four carries before Daniel Thomas, last year’s second-round pick, took over and hammered out 26 yards on five physical carries.

The team’s run average was boosted by a 15-yard quarterback scramble from Ryan Tannehill, but the Dolphins used the first half of exhibition No. 3 to try and prove this offense might not be one dimensional.

“We had some nice runs, but we had a couple of negative runs following (them) up,” coach Joe Philbin said. “We have to clean (it) up, but we did show signs of being able to run the ball effectively.”

Dolphins tight end Anthony Fasano has proven himself as a reliable target in his previous four seasons as a starter, but in the first half of Friday night’s game the Dolphins starter dropped two Tannehill passes. The second one was a third-down pass that hit his hands in the end zone.

The drop squandered a possible touchdown and the Dolphins were forced to settle for a 22-yard Dan Carpenter field goal that tied the game 3-3.

Fasano, who dropped five passes all of last season, wasn’t the only starter dropping Tannehill passes. Legedu Naanee dropped a couple. Charles Clay and Julius Pruitt each dropped a Matt Moore pass in the third quarter.

With Clyde Gates’ roster spot in jeopardy, it appears the Dolphins are auditioning kickoff returners. Former CFL tailback Marcus Thigpen handled all of the kickoffs and punts in the first half. Thigpen’s longest return was 26 yards, but he flashed playmaking ability in some instances.

Thigpen might be listed as a tailback but he’s typically played for the Dolphins as a slot receiver. It’s a role he filled with the Hamilton Tiger-Cats last season, catching 28 passes for 382 yards and two touchdowns.

Thigpen is competing with Steve Slaton for one of the final tailback spots. Slaton caught a 15-yard pass from Moore in the second half.

Dansby played in the first exhibition game, but he’s been sidelined by a right knee injury for the past two weeks. It’s doubtful he’ll play in Wednesday’s game against Dallas.

Burnett, who is nursing a back injury that made him a last-minute scratch for the Tampa Bay game, hasn’t played at all in the preseason.

Starting right guard Artis Hicks, who missed practice this week because of a neck injury, and backup tackle Lydon Murtha, who has a foot injury, missed Friday’s game.

John Jerry replaced Hicks, returning to the position he started most of 2009 at.

Murtha, the primary backup at left and right tackle, missed all of last season because of a foot injury he suffered in the exhibition season.