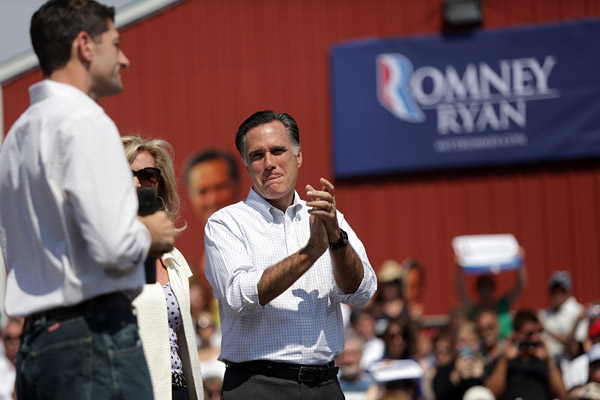 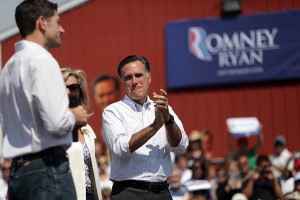 DETROIT—Mitt Romney’s visit to Commerce Township on Friday should have been a slam dunk. He was returning to his home state after a two- month absence to rally a friendly crowd of 9,300 in the county where he grew up, with a speech previewing the themes of the Republican Party’s convention in Tampa, where he’ll be feted next week as the GOP presidential candidate.

The setting was made to order: Under a cloudless summer day, there was a huge red barn on a family-owned apple orchard draped with the red, white and blue trademark scripted “R “ synonymous with the Romney campaign.

But an off-the-cuff comment from Romney that thrilled the crowd immediately set off a firestorm of criticism.

“No one’s ever asked to see my birth certificate. They know this is the place where we were born and raised.”

He noted that he was born in Detroit’s Harper Hospital and his wife, Ann Romney, was born at Henry Ford Hospital.

Democrats immediately pounced on Romney’s reference to the controversy created by so-called birthers over President Barack Obama’s birthplace. Records show Obama was born in Hawaii, but birthers suggest he wasn’t born on U.S. soil, disqualifying him to serve as president.

“Gov. Romney’s decision to directly enlist himself in the birther movement should give pause to any rational voter across America,” Ben LaBolt, press secretary for Obama’s campaign, said in a statement.

The comment was about his own upbringing in Michigan, Romney’s campaign said.

“The governor has always said, and has repeatedly said, he believes the president was born here in the United States. He was only referencing that Michigan, where he is campaigning today, is the state where he himself was born and raised,” said Sean Fitzpatrick, spokesman for the Romney campaign in Michigan.

Romney brought his vice presidential choice, U.S. Rep. Paul Ryan of Wisconsin, along as the attack dog. He bashed Obama for a failure of leadership and took a whack at a remark Obama made in 2008 about some how some small- town Midwestern voters cling to their religion and their guns.

“This Catholic deer hunter is guilty as charged and proud of it,” Ryan said . “The president can’t run on his failed record of leadership, so he’s going to try and divide us.”

Romney, meanwhile, previewed the convention, which begins Monday with his nomination, as concerns grow about the potential effect of Tropical Storm Isaac, which could become a hurricane as it heads up the Gulf of Mexico west of the Florida peninsula.

“I’m told the weather may be a little iffy there,” Romney said. “We’re not going to talk about just platitudes. We’re going to be talking about these big challenges, the soul of America and what makes this country unique and exceptional. Our way forward is the only way forward.”

Romney outlined his five-point plan to restore the country’s economy : taking full advantage of all of America’s energy resources; emphasizing job training skills for students; cracking down on trade cheaters in places such as China; balancing the budget and cutting the deficit to zero, and championing small business by revamping regulation.

“And we’ve got to remove that big cloud —rrepeal and replace Obamacare,” Romney said. “You’re going to see America come charging back.”

A small crowd of protesters yelled, “Romney, go home!” on the periphery , and a small airplane circled the farm hauling a banner that read: “Sign of a Wimp: Dodging Akin question,” referring to the controversy surrounding comments Missouri Republican Todd Akin made about rape and pregnancy.

Romney has condemned Akin’s statements and called for him to drop his Senate bid.

The rally crowd paid little attention to the demonstrators.

“We like his values and his attitude toward business,” Ed Ford, 80, of Milford said of Romney. “And we’ve got to get rid of Obama.”

The Romney campaign and emergency medical services had a hard time keeping up with the fallout of the blazing sun. Many of those who came to see Romney and Ryan were elderly and arrived between 9 and 10 a.m. Romney didn’t arrive until about 12:30 p.m. By then, several people had been taken away on stretchers after fainting in the heat without chairs or shade. Campaign volunteers passed water bottles to the crowd.