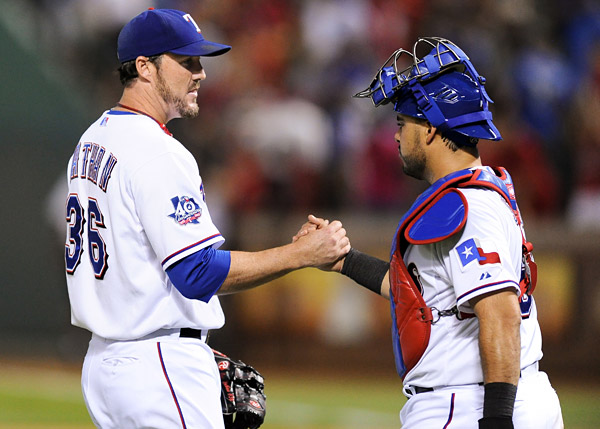 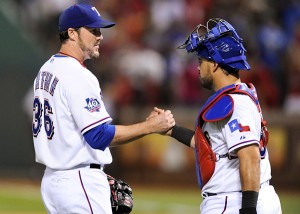 ARLINGTON, Texas — The Minnesota Twins did what they could to hang with the two-time defending AL champion Texas Rangers on Thursday, matching them with hits — and message pitches.

(PHOTO: Texas Rangers closer Joe Nathan (36) is congratulated by catcher Geovany Soto after Nathan shut the door in the ninth inning as the Rangers held off the Minnesota Twins, 10-6, at Rangers Ballpark in Arlington on Thursday, August 23, 2012, in Arlington, Texas.)

After early fireworks, which included Twins manager Ron Gardenhire and lefthander Scott Diamond being ejected in the third inning, the Twins ended up dejected after they fell apart defensively and lost 10-6 at Rangers Ballpark in Arlington.

Trevor Plouffe misplayed two grounders in the eighth and Pedro Florimon added his own booted ball during that six-run inning, which blew the game open.

Josh Hamilton went 2-for-3 with five RBI to lead the Rangers. Adrian Beltre was 3-for-5 with a home run.

“That’s a good team over there,” Twins catcher Joe Mauer said. “They capitalize on your mistakes, and they definitely capitalized on some of ours. It was a tough night.”

By then, Gardenhire and Diamond had spent plenty of time in the clubhouse after their encounters with plate umpire Wally Bell in the third.

The Twins had tied the score in the inning when Mauer batted with a runner on second base. Texas righthander Roy Oswalt, pitching inside, fell behind 3-0 before uncorking a fastball at Mauer. He turned from the pitch and was struck in the back, right above his No. 7.

Oswalt has averaged 2.1 walks per nine innings in his career, so the pitch was very uncharacteristic for him.

Hamilton stepped to the plate with one out in the bottom of the inning, and the first pitch from Diamond sailed behind his head, causing him to duck.

Bell immediately ejected Diamond, who appeared to be stunned by the decision.

“Any time in an umpire’s judgment that they go in the head area, we have to take care of business,” Bell said in a statement. “I felt at the time that he had to be ejected for it.”

Gardenhire furiously rushed to Bell and was thrown out within seconds. Gardenhire, ejected for the 62nd time in his career, got his money’s worth, yelling at Bell and motioning toward Mauer.

“You saw it,” Gardenhire said. “If you think that’s the right way to handle a situation, then we differ in opinion.”

The Twins’ view is obvious: Let teams handle those situations and then everyone moves on. If Diamond doesn’t throw that pitch near Hamilton’s head, he probably stays in the game.

“I felt I got the hook a little early,” Diamond said, “but I’m glad no one got hurt.”

The Rangers scored twice in the fifth to take a 4-2 lead, but the Twins tied the score 4-4 in the sixth with two runs. But Plouffe misplayed two grounders in the eighth — getting charged with an error on one of them — that set the tone for the Rangers’ six-run outburst.

A tough loss, but Mauer appreciated Diamond trying to look out for him.

“People in this clubhouse have each other’s backs,” Mauer said. “That’s all I can say.”