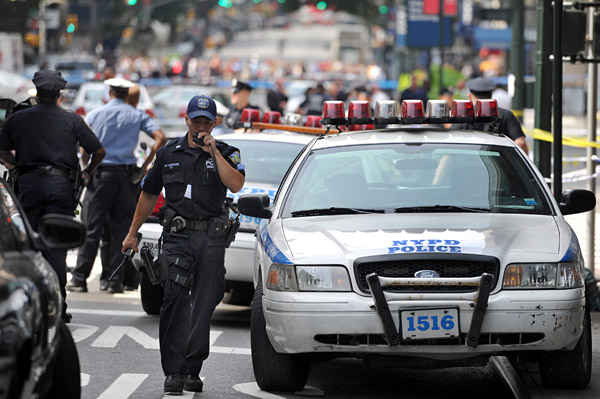 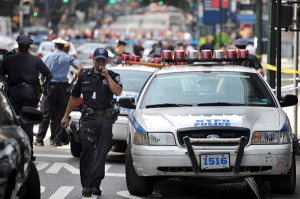 NEW YORK — Each morning, Jeffrey Johnson would put on a suit, leave his Manhattan apartment, and walk to a nearby McDonald’s to pick up breakfast. Sometimes he would greet a neighbor and pet her dog along the way.

Friday seemed no different to those familiar with Johnson’s ritual, but this time, he did not return to his apartment with breakfast in a bag. Instead, he headed to Midtown Manhattan, to his former employer’s shop near the foot of the Empire State Building, and shot an ex-colleague repeatedly in the head, police said.

As the victim lay dead on the sidewalk, a river of blood oozing from his head into the street, more gunfire erupted, panicking pedestrians who fell over one another as they fled the country’s third mass shooting in five weeks. When it was over, Johnson, 58, lay dead, shot by police officers. At least nine other people were wounded, some hit by police gunfire, but none suffering life-threatening wounds, officials said.

Mayor Michael R. Bloomberg and Police Commissioner Raymond Kelly emphasized that Johnson was angry at his former colleague and that the shooting was not terrorism-related. But that didn’t make it any less terrifying to those caught in the gunfight.

Police say Johnson had a long-running beef with the man who was killed, Steve Ercolino, 41. Ercolino was his former boss at Hazan Imports, a women’s apparel shop in a building on West 33rd Street near Fifth Avenue. Johnson, a designer of women’s T-shirts and other accessories, had been fired a year ago after six years at Hazan, where he reportedly felt that his designs were not getting the promotion he deserved. Kelly said he was laid off when the company downsized.

Witnesses described an outbreak of pandemonium at the height of rush hour on the streets outside one of New York City’s biggest tourist draws, the 102-story Empire State Building, in a city still haunted by the Sept. 11, 2001, terrorist attacks. On this sunny, clear morning, tourists already were lined up to gain entrance to the skyscraper, and workers were streaming into their offices inside.

Guillermo Ratzlaff, a construction worker on scaffolding ringing the Empire State Building, heard the first two shots. He looked down the street to see Ercolino lying on the sidewalk.

“He just kept shooting,” said another witness, who did not want his name used but who watched from across the street as more bullets were pumped into Ercolino.

“People just went everywhere,” said Ratzlaff, 29, of Brooklyn. “I thought it was terrorism at first.”

After gunning down Ercolino, Johnson walked away. “He just walked like nothing happened,” said Ratzlaff, adding that it appeared Johnson reloaded his gun.

By then, a witness had alerted two police officers outside the Empire State Building, who went to confront Johnson.

“As the two officers approached Johnson, he pulled his … pistol from his bag and fired on the officers, who returned fire, killing him,” Kelly said shortly after the shooting.

Bloomberg said surveillance cameras captured the scene. “The tape clearly shows the guy has the gun out and was trying to kill the police officers,” said the mayor, a proponent of stricter gun laws who had been discussing the issue during a weekly appearance on a local radio show when news of the shooting broke.

Later in the day, police were investigating whether Johnson actually fired a shot at the officers.

“Thank God nobody else was seriously injured,” Bloomberg said later at the shooting scene. “Again, there’s an awful lot of guns out there.”

“Seven days a week, he would leave between 7:30 and 8 in the morning, come back 20 minutes later, and go into the building, always with the newspaper and always with the McDonald’s bag,” Suarez said. “I’d never see him again until the next morning.”

He said he had never been inside Johnson’s one-bedroom apartment on the second floor of an unassuming, six-story building that also houses a pet grooming shop and a massage-therapy studio.

Carolyn Reinach Wolf, an attorney who specializes in cases involving workplace violence, said it is unusual for an angry ex-worker to wait a year before lashing out against a former employer. But she said people sometimes stew over what has happened “until they reach a boiling point, while with others there is a triggering factor which causes the individuals to become violent.”